We found that there isn’t much information on how often substitution occurs. All 42 states have at least 1 procedure to prevent substitution, such as searching databases to determine whether CHIP applicants have other coverage. 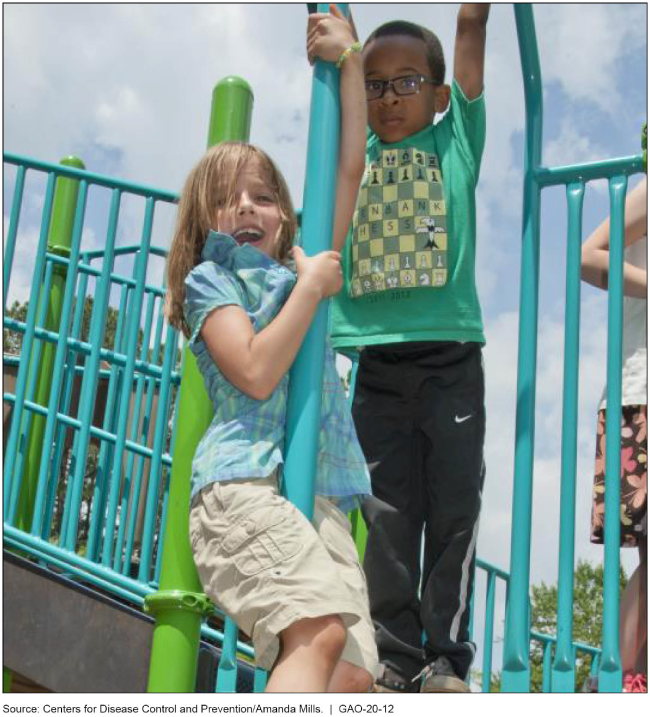 Two children playing on a playground

Not all of these 42 states reported on these indicators and GAO found that those that do may calculate them differently. CMS officials acknowledged that not all states report on these indicators; however, they noted that states operating separate CHIPs have other processes in place to prevent children with other health insurance from enrolling in CHIP. Further, some states may have other processes for directly measuring CHIP crowd-out. GAO also identified three studies published between 2013 and 2018 that estimated CHIP crowd-out. However, these studies used different methods to calculate crowd-out, and as a result produced varied estimates. For example, one study attributed a portion of increased enrollment in CHIP and other public insurance to crowd-out, while another study found no evidence of crowd-out.

According to CMS's 2017 annual reports and other information, the 42 states with separate CHIP programs reported implementing at least one of six types of crowd-out prevention procedures.

CHIP is a public insurance program established in 1997 that finances health care for over 9 million low-income children whose household incomes do not qualify them for Medicaid. States have flexibility in structuring their CHIP programs under broad federal requirements, and their income eligibility limits vary. Policymakers have had concerns that some states' inclusion of children from families with higher income levels could result in some families substituting CHIP for private insurance (i.e., crowd-out). Crowd-out may occur when, because of CHIP availability, (1) employers make decisions about offering health insurance; or (2) employees make decisions about enrolling in employer-sponsored health insurance.

GAO was asked to examine CHIP crowd-out. This report describes (1) the information on potential indicators of crowd-out reported by states and estimates of crowd-out; and (2) the procedures CMS and states use to address potential crowd-out.

GAO reviewed federal laws and guidance and state CHIP documentation, including their 2017 annual reports (the latest available at the time of GAO's review); conducted a literature review of studies published between 2013 and 2018; and interviewed CMS officials, stakeholders from national health policy organizations, and researchers. GAO also interviewed a non-generalizable selection of officials from nine states chosen to obtain variation in CHIP programs, such as income eligibility levels and geography.