Treasury’s Fiscal Service borrows the money needed to operate the federal government. It reports the debt in a financial statement called the Schedule of Federal Debt.

Each year, we audit and issue an opinion on the Schedules of Federal Debt and the effectiveness of related internal controls (e.g., ability to ensure that transactions are properly authorized and recorded). In FY19, we found that the Schedules were reliable. Also, Fiscal Service maintained effective internal control over financial reporting related to the debt, although controls over information systems could be improved.

2019 Federal Debt of the U.S. Government 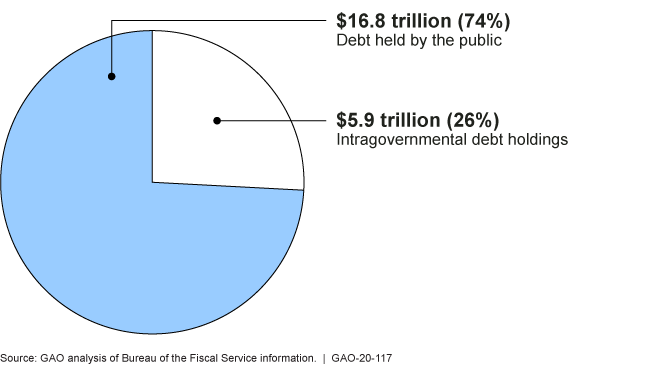 In GAO's opinion, the Bureau of the Fiscal Service's (Fiscal Service) Schedules of Federal Debt for fiscal years 2019 and 2018 are fairly presented in all material respects, and although internal controls could be improved, Fiscal Service maintained, in all material respects, effective internal control over financial reporting relevant to the Schedule of Federal Debt as of September 30, 2019. GAO's tests of selected provisions of applicable laws, regulations, contracts, and grant agreements related to the Schedule of Federal Debt disclosed no instances of reportable noncompliance for fiscal year 2019. Although Fiscal Service made progress in addressing prior year deficiencies, unresolved information system controls deficiencies continued to represent a significant deficiency in Fiscal Service's internal control over financial reporting, which although not a material weakness, is important enough to merit attention by those charged with governance of Fiscal Service.

From fiscal year 1997, the first year of audit, through September 30, 2019, total federal debt managed by Fiscal Service has increased from $5.4 trillion to $22.7 trillion, and the debt limit has been raised 19 times.

As GAO has previously reported, projected federal spending will increase more rapidly than revenue. Absent action to address this imbalance, the federal government faces an unsustainable growth in debt. In addition, the debt limit is not a control on debt but rather an after-the-fact measure that restricts the Department of the Treasury's (Treasury) authority to borrow to finance decisions already enacted by Congress and the President. GAO has suggested that Congress consider alternative approaches for managing the level of debt.

Federal debt managed by Fiscal Service consists of Treasury securities held by the public and by certain federal government accounts, referred to as intragovernmental debt holdings. Debt held by the public primarily represents the amount the federal government has borrowed to finance cumulative cash deficits. Intragovernmental debt holdings represent balances of Treasury securities held by federal government accounts—primarily federal trust funds such as Social Security and Medicare—that typically have an obligation to invest their excess annual receipts (including interest earnings) over disbursements in federal securities.