The Corps evaluates proposed projects’ benefits, costs, and other effects—submitting them to OMB for review, then to Congress to consider authorizing construction.

Some navigation projects may benefit noncommercial harbors—some of which are used by state maritime academies for military training. Corps officials said that they could consider those benefits, but have not done so because such benefits would likely not affect whether a project is submitted to OMB. 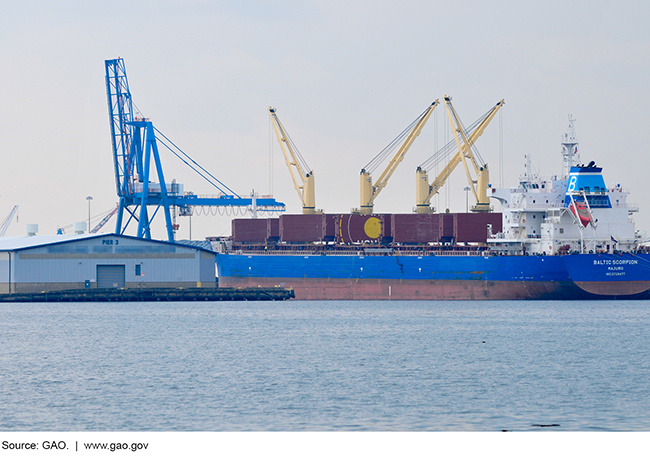 Large ship and cranes at port

To help determine whether U.S. Army Corps of Engineers' (Corps) water resources development projects—such as navigation projects—warrant federal investment, the agency develops feasibility studies that identify and evaluate proposed projects' benefits, costs, and effects. As part of a six-step process for conducting feasibility studies, the Corps evaluates alternative plans for proposed projects using economic analyses of benefits and costs and separate types of analyses, such as changes to regional employment. The Corps uses the results of the economic analyses of benefits and costs to recommend the plan with the greatest net benefits from among the alternatives, unless an exception is granted. For example, Corps guidance indicates that projects may deviate from the alternative plan with the maximum net benefits if the nonfederal sponsor of the proposed project requests such a deviation and the Assistant Secretary of the Army for Civil Works approves it. Once the Corps finalizes its feasibility studies, the agency provides reports, including its recommended plans for proposed projects, to the Office of Management and Budget (OMB) for review.

Upon receipt of the Corps' reports, OMB staff told GAO that they do not conduct separate economic analyses to evaluate the benefits and costs for the Corps' water resources development projects. Rather, staff said they review the Corps' feasibility studies, including the economic analyses, to help ensure consistency with executive branch policies. Through a separate process, OMB staff said they consider the Corps' recommended projects whose construction have been authorized by statute for potential inclusion in the President's budget request that is annually submitted to Congress. At this point, OMB staff said they assess whether the projects meet performance-based criteria, such as if the proposed projects have a benefit-to-cost ratio of 2.5:1 or higher.

When conducting economic analyses for navigation projects, Corps officials said that it is possible to consider navigation benefits for noncommercial harbors that are used by state maritime academies for military-training purposes. They said that they have not done so, however, because such benefits would likely be incidental and not significant to the selection of a project for recommendation. OMB staff said that the Corps has not submitted for review economic analyses of navigation benefits for noncommercial harbors used by state maritime academies for military-training purposes, nor has OMB conducted such analyses. State maritime academy officials GAO contacted also said they were not aware of such analyses.

The Corps is one of the world's largest public engineering, design, and construction-management agencies. Through its Civil Works program, the Corps plans, designs, constructs, operates, and maintains water resources development projects that provide support for commercial navigation, among other program missions. The Corps' guidance for its commercial navigation mission directs the agency to provide safe, reliable, and efficient waterborne transportation systems—such as channels, harbors, and waterways—for movement of commerce, among other things. According to Corps headquarters officials, the agency's navigation projects potentially provide navigation benefits to noncommercial harbors, and some of these harbors are used by various state maritime academies for military-training purposes.