Medicare pays for hospice care—pain and symptom management—for beneficiaries with terminal illness and a life expectancy of 6 months or less.

The Centers for Medicare & Medicaid Services works with surveyors to inspect hospices to ensure compliance with federal health and safety standards. CMS also collects data on the quality of hospice care—like the number of hospice staff visits in the last days of life—but surveyors aren’t required to use that data to inform their inspections.

We recommend that CMS require surveyors to use information, such as hospices’ quality of care data, to help better identify potential care issues. 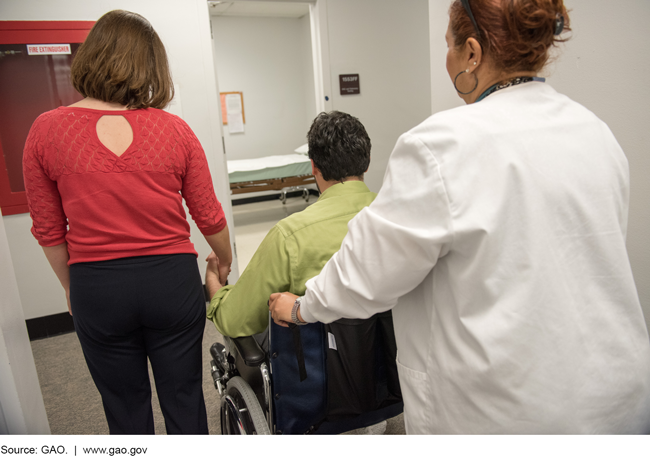 Medicare's hospice benefit provides palliative care to beneficiaries with terminal illnesses and a life expectancy of 6 months or less. GAO's review of 2017 data from the Centers for Medicare & Medicaid Services (CMS) found that for-profit and non-profit hospices had, on average, similar scores on CMS's current quality measures that indicate hospice performance in areas such as pain assessment and discussion of beneficiary treatment preferences. However, for-profits were more often among the subset of providers with the lowest scores on certain quality measures GAO reviewed. In addition to analyzing providers' scores on CMS quality measures, GAO analyzed provider performance on other indicators, identified by researchers, that could signal quality issues and found performance varied among for-profit and non-profit hospices. One of the other quality indicators GAO analyzed was the rate of beneficiaries discharged from hospice prior to death, which in some cases could indicate dissatisfaction with care leading to the beneficiary's decision to leave the hospice provider. In addition, GAO examined the number of provider visits to give medical and emotional support within the last few days of a beneficiary's life. With regard to these indicators, for 2017, GAO found the following, among other things:

472 hospice providers (462 for-profits and 10 non-profits) had a high rate of discharging beneficiaries prior to death (50 percent or more were discharged). According to research, a high discharge rate could, in some cases, be an indicator of poor quality of care or of provider misuse of the benefit, in that the hospice may be enrolling beneficiares who are not eligible for hospice care.

83 providers (80 for-profits and 3 non-profits) did not have hospice staff (such as nurses, physicians, or nurse practitioners) visit beneficiaries within the last 3 days of their life—a critical time in providing quality care, according to researchers GAO interviewed.

CMS's oversight of the quality of care provided by hospice providers consists primarily of inspections—called surveys—of hospice providers. GAO found that, while CMS instructs surveyors to review previous survey findings and complaints, CMS does not instruct surveyors to use information on providers' performance on quality measures or other potential indicators of quality as part of the survey process. For example, CMS does not instruct surveyors to consider whether a hospice provided staff visits during beneficiaries' last week of life. According to research, this information could be used to enhance the survey process. GAO also found that CMS is limited to one enforcement option—termination of the Medicare provider agreement—which CMS uses rarely and generally only when providers fail to correct within the required time frame the most serious violations of federal health and safety requirements. According to two researchers, additional remedies, such as civil monetary penalties, could enhance CMS's oversight by addressing performance problems that do not merit termination and incentivize agencies to improve quality of care. CMS uses a range of remedies for other provider types, such as home health agencies and nursing homes, but lacks authority to impose such additional sanctions on hospices.

GAO was asked to review aspects of Medicare's hospice program. This report, among other things, (1) compares quality scores and other potential indicators of quality for for-profit and non-profit hospices; and (2) examines opportunities for strengthening CMS's oversight of hospice providers.

GAO analyzed CMS data on hospice care for 2014 through 2017—the latest years for which full-year data were available at the time of GAO's analysis—and reviewed research on hospice care. GAO interviewed CMS officials, researchers, provider associations, a survey agency association, and a non-generalizable sample of hospice providers selected in part through referrals from other stakeholders. GAO also reviewed relevant statutes, regulations, documents, and enforcement data.

CMS should incorporate the use of additional information that could be used to identify quality of care issues into its survey process for hospice oversight. Congress should consider giving CMS authority to establish additional enforcement remedies for hospices that do not meet federal health and safety requirements. The Department of Health and Human Services concurred with GAO's recommendation.