Under some circumstances, a severe solar storm could create disturbances in Earth's magnetic field that lead to extensive power outages.

We looked at some technologies intended to protect the U.S. electrical grid from possible effects of these disturbances. Technologies being tested include:

power transformers designed to be more resistant to such currents

The government has taken some steps to mitigate risks, but questions remain regarding the likelihood and intensity of damage from geomagnetic disturbances. 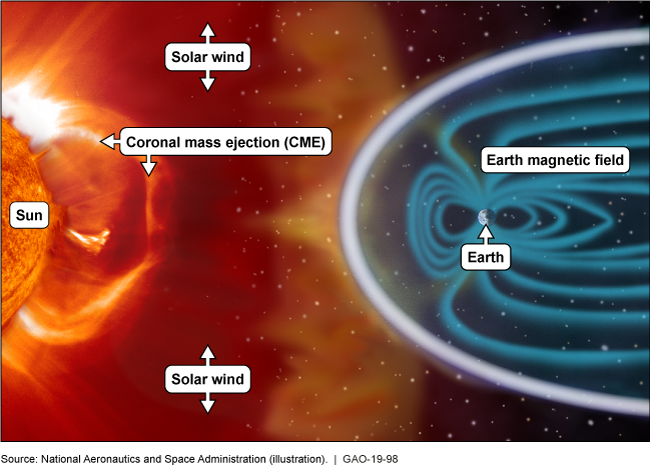 Depiction of the sun, space, and Earth, with a geomagnetic disturbance approaching Earth's magnetic field.

Geomagnetic disturbances (GMD), a result of space weather, pose a risk to the U.S. electric grid, although it is not clear how severe a risk. When GMDs occur, they can cause geomagnetically induced current (GIC) in the electric transmission grid, which can cause service disruption or damage under some circumstances (see figure). GMDs of varying levels occur regularly, but they rarely cause significant effects on the grid—either large-scale service disruptions or damage to electric grid equipment, particularly transformers. Since 1932, just four GMDs have significantly affected the grid worldwide. In the United States, the only significant effect of GMDs has been four transformers damaged at one power plant throughout 1989 with no loss in electric service.
While there is general consensus that GMDs pose a threat to the electric power grid, there are differing views on the scale and extent. Key factors affecting potential consequences include the magnitude of the space weather, the interaction between the space weather and Earth, and characteristics of the electric grid, including transmission line length and geographic orientation, as well as the response of transformers.
Technologies are available that may help limit the effects of GMDs on the electric grid. For example, certain currently used transformer designs can mitigate the effects of GIC on transformers. Further, some equipment currently in use can mitigate the effects of GMDs. For example, series capacitors, which are used to improve the capacity of long transmission lines, can eliminate GIC. One GIC-mitigating technology, neutral blocking capacitors, has been developed and operationally tested, but has not yet been widely deployed.
Federal policymakers face three broad questions that need to be addressed: (1) What is the likelihood of a large scale GMD? (2) What is the risk such storms pose to the electricity grid? and (3) What are potentially effective solutions to mitigate the effects of a large scale GMD? Efforts are under way to address aspects of each question that will help inform whether additional actions are needed to prevent or mitigate the effects of GMDs on the U.S. electric grid.

Space weather refers to the impacts solar activity can have on the space environment, including the propagation of material that can cause electromagnetic events on Earth. When the space weather is severe, it can cause a large-scale GMD that may disrupt the reliable operation of the U.S. electric power grid.
GAO was asked to examine the availability of technologies that may mitigate the effects of large-scale electromagnetic events and the issues and challenges associated with the usage of such technologies. This report addresses: (1) what is known about the potential effects of GMDs on the U.S. electric grid; (2) technologies that are available or in development that could help prevent or mitigate the effects of GMDs; and (3) factors that could affect the development and implementation of these technologies.
GAO interviewed government and industry officials about potential GMD effects on the electric grid, including officials from 13 electric power suppliers that were selected based in part on their experiences preparing for and mitigating GMD effects. GAO reviewed technical studies identified through a literature review, as well as relevant Federal Energy Regulatory Commission orders and North American Electric Reliability Corporation (NERC) reliability standards.
GAO received technical comments on a draft of this report from seven federal agencies, NERC, and the Electric Power Research Institute, which we incorporated as appropriate.
For more information, contact Timothy Persons at (202) 512-6412 or personst@gao.gov, or Frank Rusco at (202) 512-3841 or ruscof@gao.gov.