To encourage companies to maintain and expand operations in the United States, the Foreign-Trade Zones program offers a range of benefits, such as the possible reduction or elimination of customs duties on certain imported goods.

A government board evaluates applications for establishing these zones as well as requests to reduce or eliminate specific duties and fees. We found the board followed its procedures—such as considering public and industry comments—in the cases we reviewed. However, its reports did not document that it considered all required criteria.

We recommended that the board more thoroughly document its applicant evaluations. 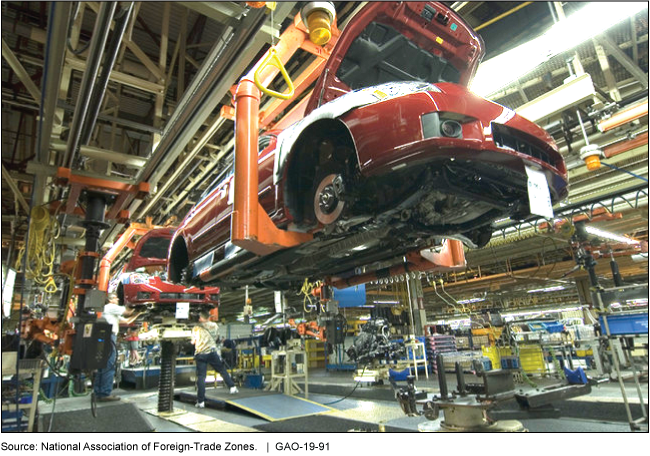 A photo showing a car being built.

The U.S. Foreign-Trade Zones Board (the Board) has procedures that generally align with its regulations for evaluating production notifications and followed these procedures for all 59 notifications GAO reviewed. Notifications are filed by companies proposing to bring foreign components into a foreign-trade zone (FTZ) for use in manufacturing finished products, among other purposes. GAO found, for example, that, following Board procedures, Board staff evaluating the notifications collected and considered comments from the general public, industry specialists, and U.S. Customs and Border Protection and recommended to the Board whether to authorize companies' proposed activities. Of the 59 notifications GAO reviewed for seven industry categories, 49 notifications either were approved or were approved with restrictions—for example, the proposed activity was authorized for a limited time period or certain duty benefits were denied for one or more foreign components. Ten notifications were denied for reasons such as new or complex policy issues that required further review.

The Board also has procedures that generally align with its regulations for evaluating production applications and followed these procedures for the three applications GAO reviewed. The applications were submitted by three of the companies whose notifications were denied. According to Board staff, if a notification is not approved or is approved with restrictions, a company may submit an application with additional details. Following Board procedures, Board staff, for example, collected and considered comments and recommended to the Board whether to authorize the proposed activities. Two of the applications were approved with restrictions, and the third was not approved. While the regulations require consideration of a number of criteria—for example, consistency with U.S. trade and tariff law—Board staff did not document consideration of all required criteria for two of the three applications, and the procedures do not require such documentation. Board staff said they document only the most relevant criteria in their reports. Standards for Internal Control in the Federal Government states that management should document its rationale for determining a criterion is not relevant and make this documentation readily available for examination. Without such documentation, the Board lacks an institutional record that all required criteria were considered and also lacks assurance that its decisions comply with U.S. trade and tariff law and public policy.

FTZs allow companies to reduce, eliminate, or defer duty payments on foreign goods imported into FTZs for distribution or as components of other products before transferring the finished goods into U.S. commerce or exporting them overseas. The value of foreign and domestic goods admitted to FTZs in 2016 exceeded $610 billion. Responsibilities of the Board, consisting of officials from the Departments of Commerce (Commerce) and the Treasury, include evaluating production notifications and applications on the basis of factors such as the proposed activity's net effect on the U.S. economy. Federal regulations set forth requirements, pursuant to the Foreign-Trade Zones Act of 1934, for these evaluations.

GAO was asked to review the Board's evaluation processes. This report examines the extent to which the Board has established and followed procedures aligned with regulations for evaluating (1) notifications and (2) applications. GAO analyzed the Board's regulations and procedures and interviewed Commerce, Treasury, and U.S. Customs and Border Protection officials. GAO also analyzed a nongeneralizable sample of 59 of 293 notifications the Board evaluated from April 2012 through September 2017, which GAO selected to include a range of Board decisions and exclude pending decisions. GAO also analyzed all three applications the Board issued decisions on during that period.

Commerce should require Board staff to document consideration of all criteria required in the regulations when evaluating production applications. Commerce concurred with this recommendation.