For decades, many government and contract workers building nuclear weapons were exposed to toxic substances. Since 2004, a Department of Labor program has provided $4.4 billion in compensation to those claiming exposure-related illnesses.

Earlier we found Labor's explanations of claim denials and the evidence needed to support a claim could be unclear. This could make it harder to refile denied claims.

This report found Labor ultimately approved many denied claims. From 2012 through 2017, it reopened 7,000 claims and approved 69% of them.

We recommended better training for claim reviewers on communicating what is needed to reopen a claim. 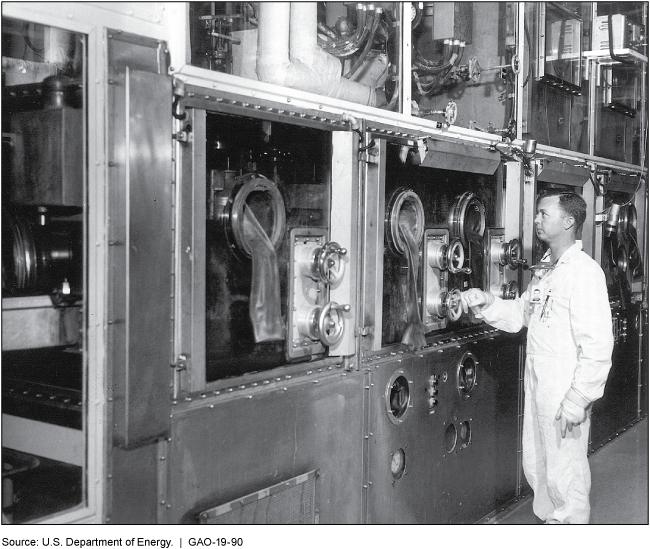 This black and white photo shows a man in a white coverall working a crank on a large machine.

The Department of Labor (DOL), from 2012 through 2017, reopened more than 7,000 compensation claims by contracted workers with illnesses resulting from exposure to toxins at Department of Energy (Energy) worksites. Of these reopened claims, 69 percent were approved for compensation (see figure). Claims can be reopened for various reasons, including new information on toxic substances and associated illnesses or new evidence provided by a claimant. According to DOL's Office of the Ombudsman officials, some claims may have been denied as a result of claimants not understanding the evidence required to support their claim. Moreover, the Ombudsman's two most recent reports in 2015 and 2016 found DOL's letters to claimants requesting additional evidence or informing them of the final decision did not clearly explain the specific evidence needed or why previously submitted evidence was deemed insufficient. GAO's previous work also found deficiencies in the quality of a sample of DOL's written communication with claimants. DOL has provided training to claims examiners on how to write clearly in correspondence and plans to assess the training. The assessment is an opportunity for DOL to better understand why some claimants remain confused about needed evidence and could help DOL target its training resources more effectively.

Outcome of Most Recently Reopened Compensation Claims by Energy Contracted Employees, 2012 through 2017

Note: ”Closed” claims are no longer active and “other” includes those with approvals for at least one claimed illness combined with other outcomes. Percentages may not sum to 100 because of rounding.

The Advisory Board on Toxic Substances and Worker Health (Advisory Board) recommended in 2016 and 2018 that DOL incorporate additional sources of information on toxic substances and associated illnesses into the database it uses to help determine eligibility for claims compensation. While DOL noted that certain additional data sources might be useful, it has not added all of the recommended data sources. The Advisory Board was created to provide technical advice to DOL on its database, among other things.

For decades, Energy, its predecessor agencies, and contractors employed thousands of employees in hazardous work in nuclear weapons production, exposing many employees to toxic substances. The Energy Employees Occupational Illness Compensation Program, administered by DOL, provides compensation for illnesses linked to exposures. Since 2004, DOL has provided about $4.4 billion to eligible employees and their survivors.

GAO was asked to review aspects of the claims process for contracted employees. GAO examined (1) the number and outcome of compensation claims for illnesses resulting from exposure to toxins that DOL has reopened since 2012, and (2) the Advisory Board's advice to DOL on the scientific soundness of its database on toxins and illnesses, and DOL's responses. GAO analyzed DOL claims data for 2012—when a new data system was introduced— through 2017 and assessed their reliability. GAO reviewed relevant federal laws and DOL procedures, and Advisory Board documents and interviewed DOL officials, Advisory Board members, experts, and a claimant advocate.