The Drug Enforcement Administration has recently obligated, on average, over $17 million a year to help state and local agencies eradicate millions of illegal marijuana plants. Agencies in states where marijuana is legal also received funds because illegal growing can occur on national forests or trespassed farm lands.

Much of these funds were used for helicopter support and overtime, reflecting long days in remote areas.

We found that agencies inconsistently reported data to DEA, making it difficult for DEA to reliably assess program performance.

We recommended that DEA improve its oversight of program performance and spending. 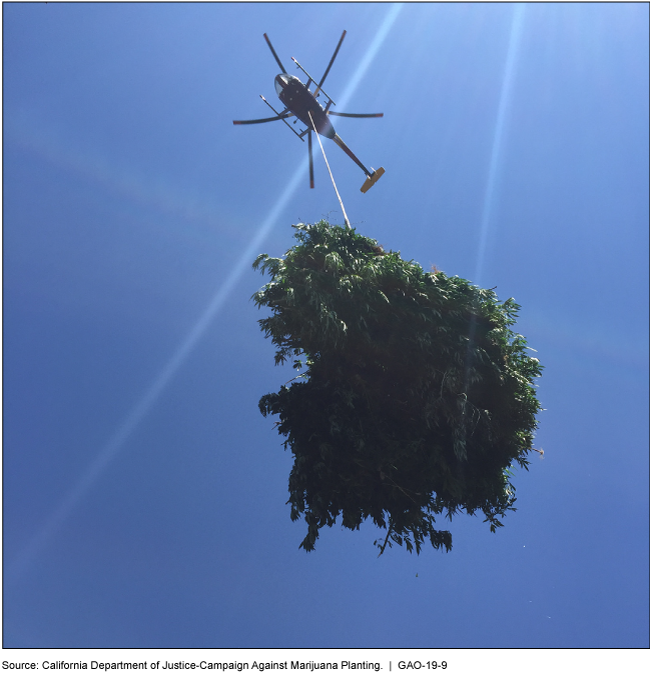 This is a photo of a helicopter in flight with a large batch of marijuana plants hanging beneath it.

The Drug Enforcement Administration (DEA) obligated over $17 million annually on average from 2015 through 2018 to its Domestic Cannabis Eradication/ Suppression Program (DCE/SP)—which supports participating state and local law enforcement agencies' efforts to eradicate illegal marijuana. DEA obligated funds to participating agencies in states with and without marijuana legalization laws. Participating agencies expended the majority of funds on aviation support and overtime (see fig. below). Officials told GAO they expended funds to help eradicate marijuana that was not in compliance with state and local marijuana laws. For example, officials in California—a state with medical and recreational marijuana legalization laws—said that all of their eradication occurs on public lands such as national forests, or private land that had been trespassed upon. In total, agencies have eradicated several million plants annually in recent years.

DEA oversees participating agencies' compliance with program expenditure requirements in various ways, but does not consistently collect supporting documentation for expenditure reports. DEA field officials collect varying levels of documentation, and headquarters officials were not aware of these varying practices. DEA officials said they are now working to address this issue, but they have not developed a plan with specific actions and time frames for completion. By developing and implementing such a plan, DEA could have greater assurance that funds are being expended appropriately.

DEA collects information on program activities to help manage DCE/SP, such as number of plants eradicated. However, participating agencies GAO spoke with have practices for reporting some program activities that differ from DEA's guidance due to varying interpretations of the guidance. As a result this information is neither fully accurate nor reliable for assessing program performance. Also, DEA has not clearly documented all of its program goals or developed performance measures to assess progress toward those goals. Improving the reliability of the information it collects, clearly documenting all program goals, and developing performance measures could provide DEA with the information it needs to manage the program more effectively.

Marijuana is generally illegal under federal law. Nonetheless, an increasing number of states have legalized medical or recreational marijuana under state law. However, in these states, some marijuana-related activity may still be illegal under state law. Since 1981, DEA's DCE/SP has provided financial support to participating state and local agencies for their efforts to eradicate illegal marijuana.

GAO is making four recommendations, including that DEA develop a plan to ensure the collection of consistent documentation of expenditures, clarify its guidance for reporting program activities, document all of its program goals, and develop performance measures. DEA concurred with the recommendations.