How do you get drug manufacturers to make drugs that treat rare diseases—when they may not sell enough to make a profit?

The Food and Drug Administration designates some drugs as "orphan drugs," which allows manufacturers to obtain incentives (like tax breaks) for developing drugs that treat rare diseases. But we found that FDA reviewers don’t always include all the required information in their reviews to determine whether a drug is eligible for orphan designation.

Especially as applications for orphan drug designations increase, we recommended improving how FDA reviews these applications. 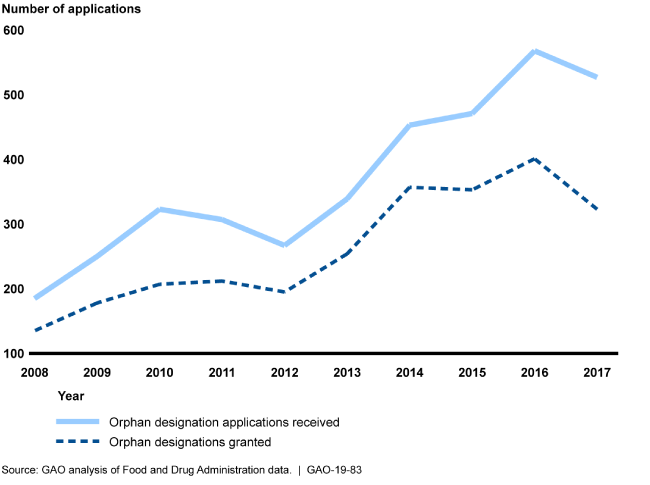 Orphan Designation Applications Received and Designations Granted from 2008 to 2017, as of April 2018 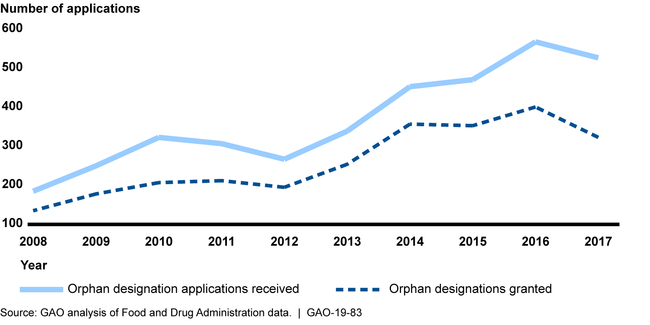 In evaluating designation applications, FDA reviewers generally apply two consistent criteria—(1) the size of the rare disease population, and (2) the scientific rationale that the drug may effectively treat the disease. To inform their evaluation, reviewers must record certain background information in a standard review template, such as the drug's U.S. marketing history. Officials told us this information provides important context, such as whether FDA has experience with a little known disease, critical to ensuring a complete designation application review. However, GAO's analysis of 148 designation review templates found that FDA does not consistently record or evaluate background information when making designation decisions. For example, 48 of 148 review templates GAO analyzed were missing information on the drug's U.S. marketing history. As such, FDA cannot be sure that reviewers are conducting complete evaluations that include all critical information needed for assessing its criteria.

Stakeholders GAO interviewed and research GAO reviewed identified a number of rare disease drug development challenges, such as the difficulty in recruiting small populations for clinical trials, with differing opinions about the ODA incentives. For example, several stakeholders were critical of manufacturers obtaining multiple orphan designations—and ODA incentives—for the same drug when the drug may otherwise be profitable from treating multiple patient groups. However, many patient advocacy groups noted that granting ODA incentives in these circumstances is needed to encourage drug manufacturers to study the safety and efficacy of drugs in rare disease populations.

GAO was asked to examine FDA's orphan drug processes. In this report, GAO examines, among other things, (1) the actions FDA has taken to address the growing demand for orphan designations; (2) the extent to which FDA has used consistent criteria and complete information in reviewing orphan designation applications; and (3) the steps FDA has taken to address rare disease drug development challenges. GAO analyzed FDA documents and data, as well as all designation review templates FDA completed as of March 2018 for applications received from October to December 2017. GAO interviewed agency officials, as well as stakeholders, including drug manufacturers, industry experts, and patient advocacy groups.

FDA should ensure that all required information for reviews of orphan designation applications is consistently recorded and evaluated. The agency concurred with our recommendation.