The Department of the Interior oversees energy production on federal lands, and is responsible for ensuring that companies pay a fair return for accessing federal energy resources.

We testified on many ways that Interior could better manage these resources. (In fact, we put Interior’s management of federal oil and gas resources on our High Risk List in 2011.)

For example, in the past we recommended controlling natural gas emissions on federal lands to ensure positive monetary and environmental effects. Although Interior issued regulations in 2016 to reduce wasteful emissions, by 2018 they were revised, inconsistent with our recommendations. 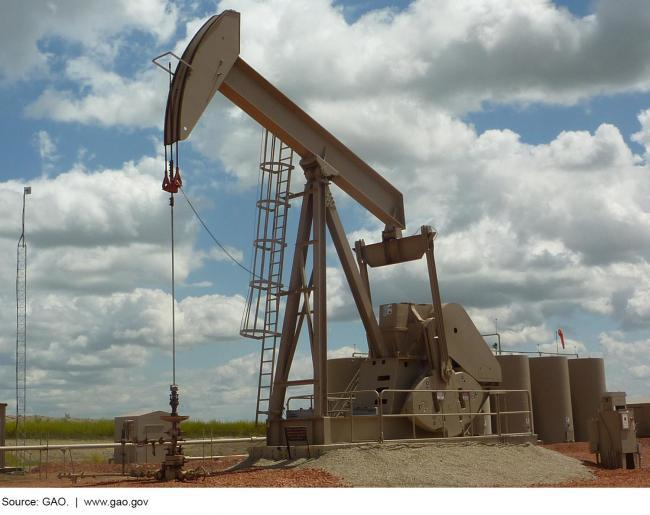 GAO's prior and ongoing work found challenges related to ensuring a fair return for oil, gas, and coal developed on federal lands in areas, including the following:

Oil, Gas, and Coal Lease Terms and Conditions. Key federal lease terms are the same as they were decades ago, and Interior has not adjusted them for inflation or other factors that may affect the federal government's fair return. In June 2017, GAO reported that raising federal royalty rates—a lease term that defines a percentage of the value of production paid to the government—for onshore oil, gas, and coal resources could decrease production on federal lands by a small amount or not at all but could increase overall federal revenue. Also, preliminary observations from GAO's ongoing work indicate that selected states charge royalty rates for oil and gas produced on state lands at a higher rate than the federal government charges for production on federal lands.

Oil, Gas, and Coal Bonding. GAO found in September 2019 that oil and gas bonds do not provide sufficient financial assurance because, among other things, most individual, statewide, and nationwide lease bonds are set at regulatory minimum values that have not been adjusted for inflation since the 1950s and 1960s (see figure). Further, GAO reported in March 2018 that coal self-bonding (where an operator promises to pay reclamation costs without providing collateral) poses financial risks to the federal government. Bonds provide funds that can be used to reclaim lands—restore them as close to their original natural states as possible—if an operator or other liable party does not do so.

Natural Gas Emissions. In October 2010, GAO reported that data collected by Interior likely underestimated venting and flaring because they did not account for all sources of lost gas. GAO reported that economically capturing vented and flared natural gas could increase federal royalty payments by $23 million annually and made recommendations to help Interior better account for and manage emissions. In November 2016, Interior issued regulations consistent with GAO's recommendations, but Interior has since issued revised regulations, which are inconsistent with GAO's recommendations.

Interior oversees energy production on federal lands and waters and is responsible for ensuring taxpayers receive a fair return for access to federal energy resources. Oil, gas, and coal on federal lands provide an important source of energy for the United States; they create jobs; and they generate billions of dollars in revenues that are shared between federal, state, and tribal governments. However, when not managed properly, energy production on federal lands can create risks to public health and the environment, such as contaminated surface water. In February 2011, GAO designated Interior's management of federal oil and gas resources as a program at high risk for fraud, waste, abuse, and mismanagement or the need for transformation. This testimony discusses GAO's work related to ensuring a fair return on resources from federal lands. To do this work, GAO drew on reports issued from May 2007 through September 2019 and preliminary observations from ongoing work. GAO reviewed relevant federal and state laws, regulations, and policies; analyzed federal data; and interviewed federal, state, and industry officials, among others.