The U.S. government has authorized hundreds of billions of dollars in arms sales to foreign governments and other foreign buyers—more than $180 billion in fiscal year 2018 alone.

State and DOD’s processes for reviewing proposed arms transfers are aligned with conventional arms transfer policy criteria and seek to ensure they are consistent with U.S. interests. 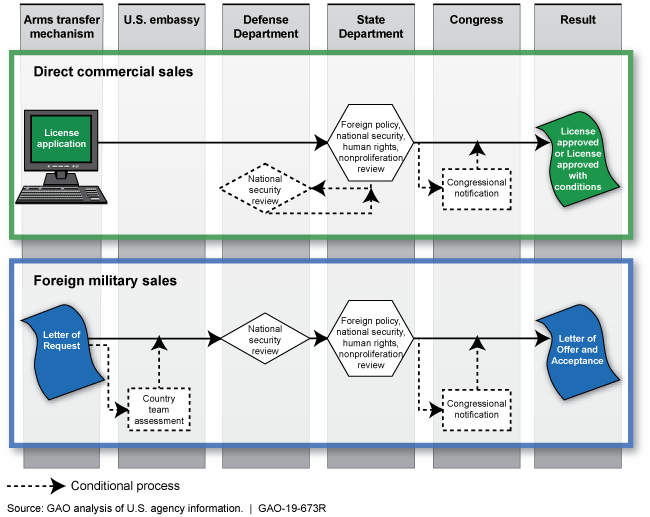 Under conventional arms transfer (CAT) policy, the Departments of State (State) and Defense (DOD) are to consider five general criteria when evaluating proposed arms transfers to foreign entities and governments. These criteria are: (1) National Security, (2) Economic Security, (3) Relationships with Allies, (4) Human Rights, and (5) Nonproliferation. CAT policy provides DOD and State flexibility in how they evaluate these criteria. The agencies are not required to assess the criteria in a specific manner or to take specific actions. Nor are they required to weigh the importance of any particular criterion over another or to consider each criterion equally. GAO found that State’s and DOD’s processes for reviewing proposed arms transfers are aligned with the CAT policy criteria, and that State and DOD use their review processes to examine if arms transfers are consistent with U.S. interests.

The two most recent CAT policies were the Obama administration’s Presidential Policy Directive, United States Conventional Arms Transfer Policy (PPD-27), issued in January 2014, and the Trump administration’s National Security Presidential Memorandum Regarding U.S. Conventional Arms Transfer Policy (NSPM-10), issued in April 2018. GAO found that these policies have broadly similar content and implementation processes and have produced fairly similar approval and denial rates. For example, available data from fiscal years 2014 through 2018 indicate that denial and approval rates for Direct Commercial Sales (DCS)—for which a U.S. corporation and a foreign buyer negotiate the sale of arms—have been fairly constant for these years.

From 2014 through 2018, the United States authorized hundreds of billions of dollars in arms transfers to foreign entities and governments, with more than $180 billion in fiscal year 2018 alone. The U.S. government uses two key programs to conduct these arms transfers and support foreign policy and national security goals: (1) DCS, for which a U.S. corporation and a foreign buyer negotiate the sale of arms and (2) Foreign Military Sales (FMS), for which the U.S. government and a foreign government negotiate an agreement for the purchase of arms. Both DCS and FMS transfers undergo extensive reviews, including national security and foreign policy reviews, intended to ensure these arms transfers safeguard U.S. interests. State oversees DCS licensing and approves FMS sales of defense articles to foreign countries, while DOD implements FMS.

Several U.S. laws, including the Arms Export Control Act and the Foreign Assistance Act, authorize the transfer of arms from the U.S. government or from U.S. companies to foreign countries or, in some cases, foreign entities, and establish requirements to review requests for such transfers and report on them to Congress. In addition, CAT policy provides a framework for the Executive Branch to consider these transfers. The two most recent CAT policies by the Obama and Trump administrations require State and DOD to consider certain criteria when evaluating proposed arms transfers.

GAO was asked to review the U.S. government’s implementation of CAT policy. For this report, GAO determined (1) whether State’s and DOD’s processes for reviewing proposed arms transfers align with CAT policy criteria; and (2) what differences, if any, exist between the content, processes, and outcomes associated with the prior and current CAT policies.

To determine whether State’s and DOD’s processes for reviewing proposed arms transfers align with CAT policy criteria, GAO analyzed State and DOD documentation and interviewed officials from relevant State bureaus and DOD offices. To identify any differences between the prior and current CAT policies, GAO conducted a content analysis of the two policies, and analyzed select DCS data from 2014 through 2018.