There were 14 separate billion-dollar weather and climate disaster events in the U.S. in 2018—with a total cost of at least $91 billion. These costs will likely rise as the climate changes, researchers say. The federal government’s fiscal exposure from climate change is on our High Risk List.

Examples of Potential Economic Effects of Climate Change by 2100 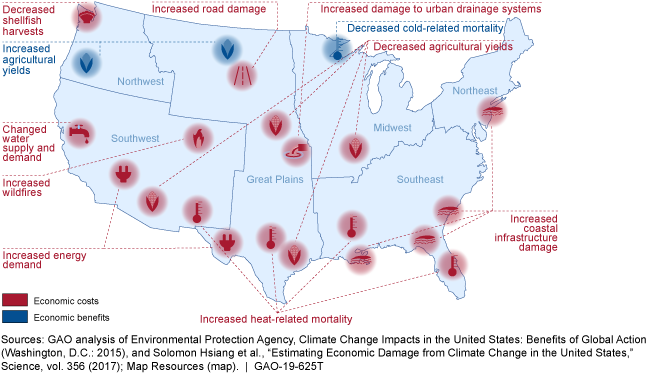 The estimated economic effects of climate change, while imprecise, can convey useful insight about potential damages in the United States. In September 2017, GAO reported that the potential economic effects of climate change could be significant and unevenly distributed across sectors and regions (see figure). This is consistent with the recent findings of the U.S. Global Change Research Program's Fourth National Climate Assessment, which concluded, among other things, that the continued increase in the frequency and extent of high-tide flooding due to sea level rise threatens America's trillion-dollar coastal infrastructure.

Examples of Potential Economic Effects from Climate Change by 2100 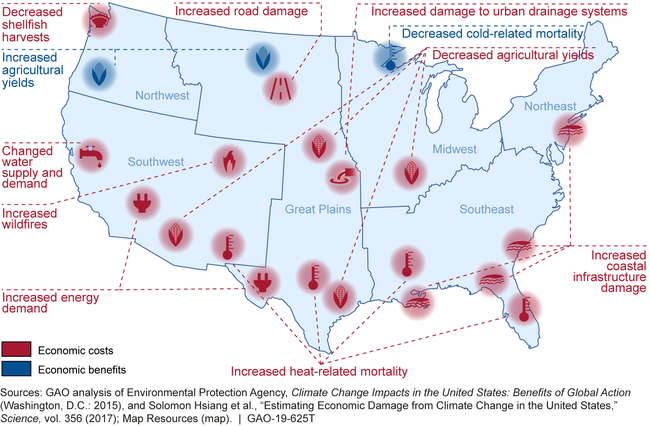 The federal budget, however, does not generally account for disaster assistance provided by Congress or the long-term impacts of climate change on existing federal infrastructure and programs. GAO has reported that more complete information about fiscal exposure could help policymakers better understand the trade-offs when making spending decisions.

Further, federal investments in resilience to reduce fiscal exposures have been limited. As GAO has reported, enhancing resilience can reduce fiscal exposure by reducing or eliminating long-term risk to people and property from natural hazards. For example, a 2018 interim report by the National Institute of Building Sciences estimated approximate benefits to society in excess of costs for several types of resilience projects. While precise benefits are uncertain, the report estimated that for every dollar invested in designing new buildings to particular design standards, society could accrue benefits amounting to about $11 on average.

The federal government has invested in individual agency efforts that could help build resilience within existing programs or projects. For example, the National Climate Assessment reported that the U.S. military integrates climate risks into its analysis, plans, and programs. In additon, as GAO reported in March 2019, the Disaster Recovery Reform Act of 2018 could improve resilience by allowing the President to set aside a portion of certain grants for pre-disaster mitigation. However, the federal government has not undertaken strategic government-wide planning to manage climate risks.

Since 2005, federal funding for disaster assistance is at least $450 billion, including approximately $19.1 billion in supplemental appropriations signed into law on June 6, 2019. In 2018 alone, there were 14 separate billion-dollar weather and climate disaster events across the United States, with a total cost of at least $91 billion, according to the National Oceanic and Atmospheric Administration. The U.S. Global Change Research Program projects that disaster costs will likely increase as certain extreme weather events become more frequent and intense due to climate change.

The costs of recent weather disasters have illustrated the need for planning for climate change risks and investing in resilience. Resilience is the ability to prepare and plan for, absorb, recover from, and more successfully adapt to adverse events, according to the National Academies of Science, Engineering, and Medicine. Investing in resilience can reduce the need for far more costly steps in the decades to come.

Since February 2013, GAO has included Limiting the Federal Government's Fiscal Exposure by Better Managing Climate Change Risks on its list of federal program areas at high risk of vulnerabilities to fraud, waste, abuse, and mismanagement or most in need of transformation. GAO updates this list every 2 years. In March 2019, GAO reported that the federal government had not made measurable progress since 2017 to reduce fiscal exposure to climate change.

GAO has made 62 recommendations related to the Limiting the Federal Government’s Fiscal Exposure by Better Managing Climate Change Risks high-risk area. As of December 2018, 25 of those recommendations remained open.