The Black Lung Benefits Program helps coal miners who have been totally disabled due to black lung disease. Coal companies found liable or the Black Lung Disability Trust Fund pay these benefits. The trust may pay if, for example, a company goes bankrupt. A domestic coal tax is the trust’s primary funding source.

We reported in 2018 that the trust faces financial challenges and that its debt could increase each year through 2050, due in part to a 2019 coal tax cut and declining coal production. We testified on our preliminary observations from ongoing work, which suggests coal company bankruptcies are further straining the trust’s finances.

Graph showing the projected increase of the trust fund's debt

GAO reported in 2018 that Black Lung Disability Trust Fund (Trust Fund) expenditures have consistently exceeded revenue. The Trust Fund borrowed from the Department of the Treasury's (Treasury) general fund and hence from the taxpayer almost every year since 1979, its first complete fiscal year, causing debt and interest to accumulate. Federal law does not limit the amount the Trust Fund may borrow as needed to cover its expenditures. Trust Fund revenue will be further limited by the coal tax rate decrease of about 55 percent that took effect in 2019, and declining coal production, according to GAO's simulation. Specifically, Trust Fund revenue may not be sufficient to cover beneficiary payments and administrative costs, from fiscal years 2020 through 2050. Therefore, the Trust Fund could need to continue borrowing to cover its expenditures—including the repayment of past debt and interest—and the Trust Fund's simulated outstanding debt could exceed $15 billion by 2050 (see figure). However, as GAO reported in 2018, various options, such as adjusting the coal tax and forgiving debt, could improve the Trust Fund's financial position. 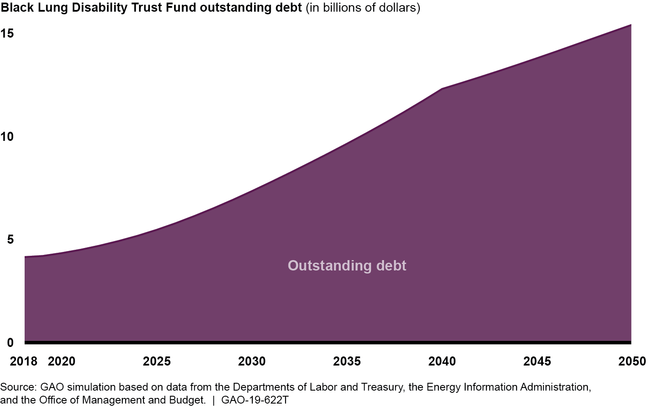 GAO's preliminary observations indicate that Trust Fund finances will be further strained by coal operator bankruptcies. Since 2014, an estimated black lung benefit liability of over $310 million has been transferred to the Trust Fund from insolvent self-insured coal mine operators, according to DOL data. Federal law generally requires that operators secure their black lung benefit liability. To do so, operators can self-insure if they meet certain DOL conditions. As of June 2019, there are 22 operators that are self-insured and actively mining coal, according to DOL officials. GAO's preliminary analysis indicates that DOL did not regularly review these operators so that it could adjust collateral as needed to protect the Trust Fund. As a result, the amount of collateral DOL required from some of these operators is tens of millions less than their most recent estimated black lung benefit liability.

Since 2009, GAO has produced a body of work on the Black Lung Benefits Program. In 2018, for instance, GAO reported that the Trust Fund, which pays benefits to certain coal miners, faced financial challenges due, in part, to the coal tax rate decrease that took effect in 2019 and declining coal production. Trust Fund finances could be further strained by coal mine operator bankruptcies, as they can lead to benefit liabilities being transferred to the Trust Fund.

This testimony describes Trust Fund finances through 2050 and provides preliminary observations from ongoing work for this committee regarding the Department of Labor's (DOL) oversight of coal mine operator insurance.

To describe Trust Fund finances, in its 2018 report GAO developed simulations through 2050 based on various assumptions related to future coal production and the number of future black lung beneficiaries. To develop preliminary observations from its ongoing work, GAO analyzed DOL documentation and data on black lung beneficiaries and coal mine operators. GAO also reviewed relevant federal laws, regulations, policies, and guidance and interviewed DOL officials, insurance carriers, and coal mine operators, among others.

GAO will be considering recommendations, as appropriate, when ongoing work is finished.