We testified before a House subcommittee about FEMA's disaster preparedness, response, and recovery operations, based on our 2011-2019 reports and ongoing work.

Among other things, we found FEMA

Has made progress since Hurricane Katrina, but faced major challenges addressing Puerto Rico's needs in 2017

Had trouble and faced delays implementing its recovery programs in Puerto Rico and U.S. Virgin Islands

Could better assist older Americans and those with disabilities 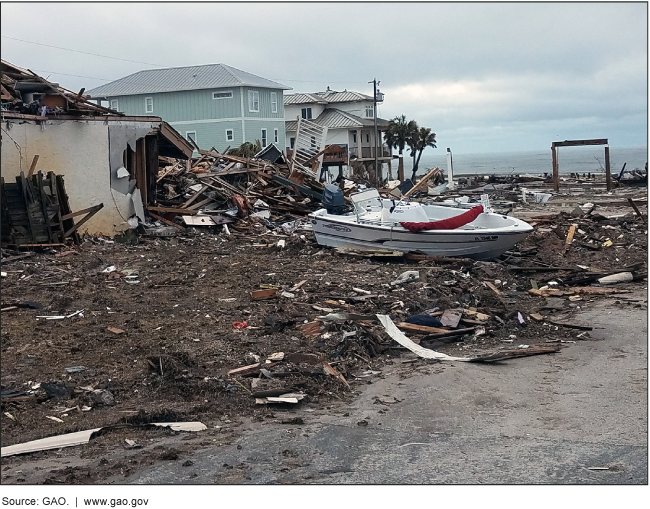 Disaster Resilience. GAO found that federal and local efforts to improve resilience can reduce the effects and costs of future disasters. FEMA has made progress in this area, but in July 2015, GAO found that states and localities faced challenges using federal funds to maximize resilient rebuilding following a disaster. GAO recommended that the Mitigation Framework Leadership Group—an interagency body chaired by FEMA—create a national strategy to better plan for and invest in disaster resilience. FEMA is working to address this recommendation and plans to publish the strategy by July 2019.

Damage from Hurricane Michael in Florida and Wildfires in California

Response and Recovery. In September 2018, GAO reported that the response to the 2017 disasters in Texas, Florida, and California showed progress since Hurricane Katrina in 2005. Specifically, FEMA and state officials' pre-existing relationships and exercises aided the response and helped address various challenges. However, GAO and FEMA identified challenges that slowed and complicated FEMA's response to Hurricane Maria, particularly in Puerto Rico. GAO's issued and ongoing work also identified challenges in implementing FEMA Public Assistance grants. For example, FEMA and Puerto Rico officials identified challenges with Public Assistance policies and guidance that have complicated and slowed the recovery. GAO did not make recommendations, but continues to evaluate recovery efforts and will report its findings later this year.

FEMA Workforce Management. GAO has previously reported on long-standing workforce management challenges, such as ensuring an adequately-staffed and trained workforce. For example, GAO reported in September 2018 that the 2017 disasters overwhelmed FEMA's workforce and a lack of trained personnel with program expertise led to complications in its response efforts, particularly after Hurricane Maria. While FEMA has taken actions to address several of GAO's workforce management-related recommendations since 2016, a number of recommendations remain open as the 2019 hurricane season begins. Also, GAO is currently reviewing FEMA's workforce management efforts and lessons learned from the 2017 disasters and will report its findings early next year.

Recent hurricanes, wildfires, and flooding have highlighted the challenges the federal government faces in responding effectively to natural disasters. The 2017 and 2018 hurricanes and wildfires affected millions of individuals and caused billions of dollars in damages. In March 2019, the Midwest experienced historic flooding that affected millions of acres of agriculture and damaged significant infrastructure. Since 2005, federal funding for disaster assistance is at least $450 billion. Increasing reliance on federal help to address natural disasters is a key source of federal fiscal exposure, particularly as certain extreme weather events become more frequent and intense due to climate change.

GAO has made numerous recommendations in its prior reports to FEMA designed to address the challenges discussed in this statement. As of May 2019, FEMA has addressed about half of these recommendations and GAO is monitoring FEMA's ongoing efforts.