When buying certain nuclear weapons components or IT systems, the Department of Energy has the authority to exclude certain suppliers. It might do so, for example, if there is a concern that a part from a foreign supplier may cause a malfunction.

DOE and its National Nuclear Security Administration were granted this authority in 2013 but never used it. Officials said the authority could be useful and identified cases for its use. However, NNSA is unlikely to use it because (1) it can only be applied to one contract at a time and (2) required approval may take too long.

We recommended that DOE and NNSA notify Congress about their concerns.

The Department of Energy headquarters 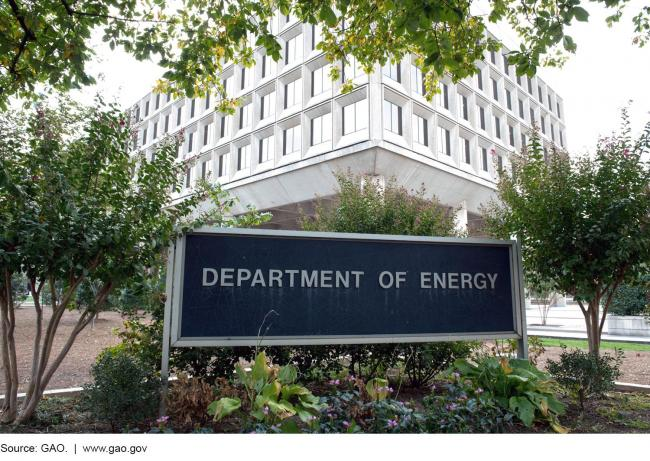 Department of Energy entrance sign with the building in the background

Officials from the Department of Energy’s (DOE) National Nuclear Security Administration (NNSA) said that DOE has not used its enhanced procurement authority since it was authorized in December 2013. This authority allows the Secretary of Energy, in the interest of national security, to exclude suppliers from certain procurements made directly by DOE and NNSA or indirectly by a contractor, if various conditions are met. The authority applies to procurements of “covered systems”—primarily nuclear weapons components and items associated with the design, production, and maintenance of such weapons; items associated with the design and development of nonproliferation and counterproliferation systems; and certain information technology systems. NNSA officials stated that since August 2018, they identified additional circumstances that could warrant using the enhanced procurement authority. However, the officials said that NNSA is unlikely to use the authority because of concerns that it could (1) take significant time to get approval from the Secretary of Energy to use and (2) only be applied on a case-by-case basis and not across multiple contract actions involving a supplier for which a specific supply chain risk has been identified.

However, NNSA has not yet formally communicated its concerns about, and suggested changes for, amending the authority to relevant congressional committees because NNSA has not finalized its report, plans for which have been delayed by over a year. By formally communicating the agency’s concerns about, and suggested changes to, the enhanced procurement authority in a timely manner, NNSA would provide Congress with the relevant information for considering how to make the authority more useful to DOE and NNSA for managing supply chain risks.

The continued globalization of the nation’s supply chains—including the trend toward using a non-domestic supply chain for some nonnuclear components of nuclear weapons and related systems—has led to heightened risks of potential supply chain exploitation. According to NNSA, malevolent exploitation of NNSA supply chain vulnerabilities could affect weapon functionality. For example, according to DOE and NNSA documents, a counterfeit or sabotaged component could cause a nuclear weapon to malfunction. The National Defense Authorization Act for Fiscal Year 2014 provides the Secretary of Energy with an enhanced procurement authority. The Secretary may use the authority to exclude suppliers from the procurement of a covered system without providing the supplier with a reason, and the Secretary’s decision is not subject to review in federal court.

The National Defense Authorization Act for Fiscal Year 2014 includes a provision for GAO to report on DOE’s use of the enhanced procurement authority and on the status of any previous recommendations GAO has made in this area. This report updates GAO’s previous work by examining the extent to which DOE used its enhanced procurement authority to manage supply chain risks and assessed the circumstances and factors that officials reported as affecting its use since GAO last reported on it in August 2018.

GAO reviewed the conditions for using the enhanced procurement authority as described in the act and DOE and NNSA documents. GAO interviewed NNSA officials involved with decisions to use the authority to determine the extent to which DOE has used the authority, including whether any additional circumstances in which to use the authority may have been identified since GAO’s August 2018 report; the status of the agency’s actions taken in response to GAO’s August 2016 recommendation; and the status of NNSA’s assessment of the circumstances and factors that could affect DOE’s and NNSA’s use of the authority.

GAO recommends that DOE, in coordination with NNSA, formally communicate to the relevant congressional committees concerns about, and suggested changes to, the enhanced procurement authority in a timely manner. NNSA agreed with GAO’s recommendation.