Medicaid spent over $177 billion on hospital care in fiscal year 2017. A quarter of these payments were supplemental payments—lump sum payments that are not tied to a specific patient's care.

Disproportionate share hospital payments are one type of supplemental payment. To help offset the costs for hospital services, these payments are given to hospitals that serve a high proportion of Medicaid and uninsured patients.

We found that these payments covered 51% of the costs of uncompensated care at hospitals receiving payments nationwide. 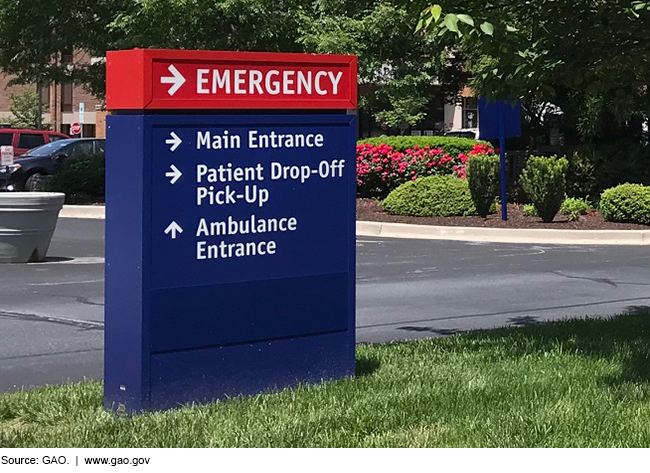 Photo of the exterior of a hospital

Across states, GAO found that total DSH payments varied significantly in 2014. DSH payment levels are generally tied to state DSH spending in 1992 and since 1993 states have been subject to a limit on the amount of federal funding that may be used for DSH payments.

Medicaid, the joint federal-state program that finances health care coverage for low-income and medically needy individuals, spent an estimated $177.5 billion on hospital care in fiscal year 2017. About a quarter ($46.3 billion) of those hospital payments were supplemental payments—typically lump sum payments made to providers that are not tied to a specific individual's care. States determine hospital payment amounts within federal limits. In fiscal year 2017, DSH payments totaled about $18.1 billion. Beginning in fiscal year 2020, the amount of DSH payments each state can make is scheduled to be reduced.

GAO analyzed data from the 2014 DSH audits—states' independently audited and certified reports of hospital-level uncompensated care costs and DSH payments—from 47 states and the District of Columbia (48 states). Three states were excluded from the analysis because they either did not make DSH payments or the submitted data were unreliable. The 2014 data were the most recently available audited, hospital-specific, data at the time of GAO's analysis. We provided a draft of this report to HHS for review. HHS provided technical comments, which we incorporated as appropriate.