The State Department and U.S. Agency for International Development were responsible for managing $33.7 billion in foreign assistance in fiscal year 2018.

We found that State submitted required reports to Congress detailing how these funds were allocated to foreign countries and international organizations. However, State submitted the reports 80 to 230 days past the mandated 30-day time frame in fiscal years 2015-2018.

Several factors contributed to State’s delays. We made 3 recommendations, including that State identify any inefficiency in its review process and work with USAID to address staffing vacancies. 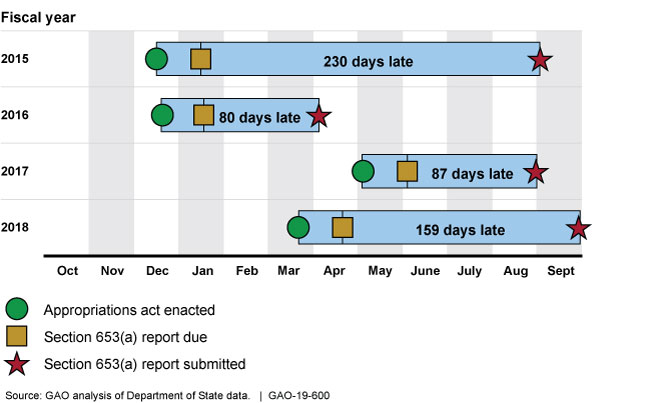 The Department of State (State), through its Section 653(a) report, has provided Congress with information on the allocation of U.S. foreign assistance funds to foreign countries and international organizations by category of assistance as mandated, but the reports were not submitted within the mandated time frame. Specifically, in fiscal years 2015 through 2018, State submitted Section 653(a) reports from 80 to 230 days past the 30-day mandate, as shown in the figure.

Multiple factors contributed to delays in submitting the Section 653(a) report.

First, State has developed a multistep process for responding to hundreds of congressional instructions each year, while also reflecting administration priorities, which is not designed to meet the mandated time frame. This process involves coordination with the U.S. Agency for International Development (USAID), about 200 bureaus and overseas posts, and the Office of Management and Budget. Even though State's process is complex and does not meet the mandated time frame, State has not systematically reviewed its process since it revised the process in fiscal year 2016. State officials said that the process is necessary to address congressional instructions and administration priorities and because they use the allocations in the report as a basis for spend plans required to obligate funds.

Second, a key part of State's process, involving data collection, has weaknesses that lead to discrepancies and hinder efficiency. According to federal internal control standards, agency data systems should provide quality data that is free from errors. However, State's mechanism for collecting information is a spreadsheet-based system susceptible to human errors, and State does not have appropriate controls in place to ensure data consistency.

State and USAID were responsible for managing $33.7 billion in foreign assistance funds in fiscal year 2018. Section 653(a) of the Foreign Assistance Act of 1961 mandates the President to report to Congress, on an annual basis, funding allocations by foreign country and category of assistance within 30 days of Congress appropriating certain funds. State, in coordination with USAID, makes decisions on how to allocate the funds, taking into consideration congressional instructions, the administration's priorities, and country-specific foreign assistance needs.

GAO was asked to review State and USAID's process to respond to Section 653(a). This report examines (1) the extent to which State met the mandates under Section 653(a) for fiscal years 2015 through 2018 and (2) factors that affected State's ability to address the mandates. GAO reviewed annual appropriations acts and Section 653(a) reports submitted during fiscal years 2015–2018, and met with State, USAID, and Office of Management and Budget officials in Washington, D.C.

GAO is making three recommendations to State: (1) conduct a systematic review of the Section 653(a) process to identify inefficiencies and determine the amount of time needed to prepare the Section 653(a) report, and if it exceeds 30 days, request that Congress extend the mandated time frame; (2) improve data collection; and (3) develop a plan to address staff vacancies, in consultation with USAID as appropriate. State concurred with these recommendations.