The Army Corps operates and maintains over 700 dams, including the Harlan County Dam in Nebraska. The Corps recently repaired this dam's "Tainter gates"—which control water flow over the dam—to correct a design deficiency. Irrigators that draw water from the dam are responsible for paying for part of the $30 million repair.

These repairs mark the Corps' first application of a formerly-unused provision in law that lowers the share of the cost that irrigators pay. We examined how use of this provision changed the total amount owed by irrigators and the steps the Corps is taking to use this provision more broadly. 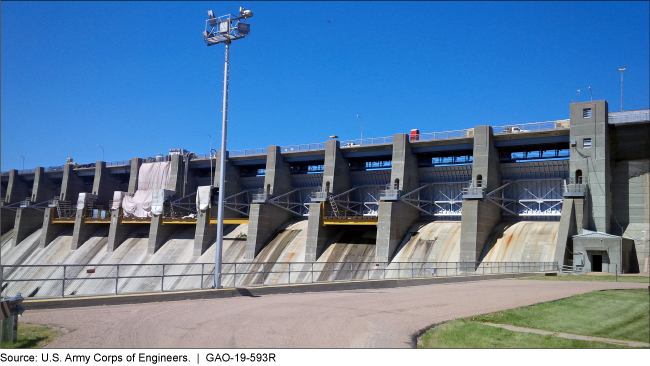 Picture of the Harlan County Dam in Nebraska when repairs were being made to the dam's Tainter gates.

In January 2019, the U.S. Army Corps of Engineers (Corps) decided to apply a formerly unused provision in law to lower the share of costs of repairing the Harlan County Dam to be paid by irrigation districts that benefit from the dam. The repair project involved addressing a design deficiency with the dam's "Tainter gates"—a commonly used type of gate to control the flow of water over the dam. In initial planning for the major repair project in 2012, the Corps determined that the irrigation districts were to pay their full share of costs for these repairs—that is, the same share of costs the districts pay for routine operations and maintenance costs. Although the repairs to the Tainter gates were needed to meet updated design standards and address safety concerns, the Corps had initially followed long-standing policy to not use a provision—called the state-of-the-art provision—that lowers a user's share of costs when repairs are needed to meet updated design or construction criteria deemed necessary for safe operation of the dam. However, GAO recommended in December 2015 and a provision in law subsequently required that the Corps clarify policy guidance on when the state-of-the-art provision might apply. Since then, the Corps and the Assistant Secretary of the Army for Civil Works had been contemplating changes to the policy and, in January 2019, decided to apply this provision for the first time to the portion of the major repairs needed to address changes in design criteria for Tainter gates at the Harlan County Dam. More broadly, in March 2019, the Corps began implementing a new policy that allows for use of the state-of-the-art provision across its dam portfolio.

The Corps operates over 700 dams that provide a wide range of benefits such as flood control and irrigation. In Nebraska, the Corps operates the Harlan County Dam, which is a source of water used by two irrigation districts. The irrigation districts are responsible for paying a share of costs incurred by the Corps to operate and maintain as well as make major repairs to the dam. In 2018, the Corps completed a roughly $30 million major repair project of this dam's Tainter gates out of concern that they might fail due to a deficient design. For this major repair project and others, some users of dams have raised questions about how the Corps determines what share of costs the users have to pay.

To address these objectives, GAO examined the Corps' policy documents and reports, reviewed repayment contracts for the repair project managed by Reclamation, and interviewed Corps and Reclamation officials.