The Northern Triangle countries of El Salvador, Guatemala, and Honduras have long struggled with poverty, weak governance, and insecurity. In 2014, the U.S. government introduced a strategy to increase their prosperity and strengthen governance and security. Has the strategy been working?

Agencies allocated $2.4 billion for 370 projects to support these objectives from fiscal years 2013 to 2018. However, agencies reported mixed results for projects and little information on overall progress. While State and USAID had a plan to assess progress, the plan didn’t include all agencies’ activities. We recommended they develop a comprehensive plan. 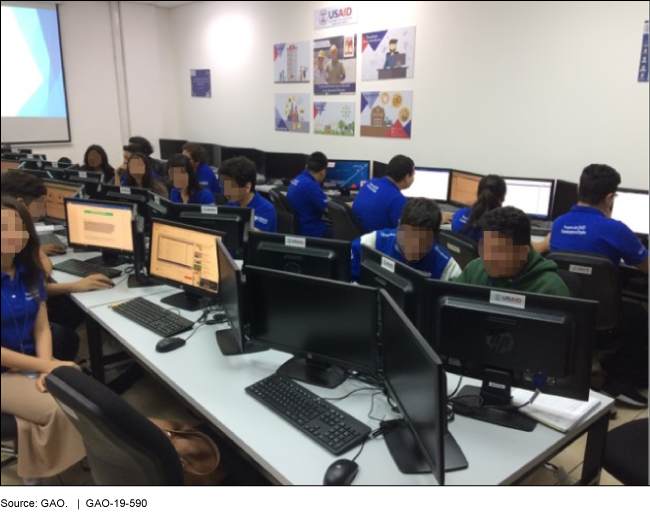 For the Spanish translation of the highlights page for this document, see GAO-19-709.

To support their prosperity, governance, and security objectives, the Departments of State (State), Defense (DOD), Agriculture (USDA), and the U.S. Agency for International Development (USAID) allocated about $2.4 billion from fiscal years 2013 through 2018 for 370 projects in the Northern Triangle—El Salvador, Guatemala, and Honduras. USAID and State implemented most of these projects, with some supporting more than one sector and objective. For example, USAID implemented projects to address poverty, while State trained prosecutors and police to address governance and security needs.

Number of Projects Supporting Prosperity, Governance, and Security Objectives in the Northern Triangle by Country, Fiscal Years 2013 through 2018

State, USAID, and other agencies reported mixed results for the 190 projects in the six sectors GAO reviewed. For example, in fiscal year 2018, USAID assisted 1,376 individuals in workforce development programs in Guatemala, exceeding the target of 1,000, while it assisted 651 individuals in Honduras, falling short of the target of 5,000. State and USAID trained 12,557 justice system personnel in the Northern Triangle, exceeding the target of 2,275. USDA rehabilitated school kitchens in Honduras as part of its school feeding program. DOD helped Guatemala establish a budget system to increase accountability for military funds, but DOD reported persistently low public trust in Northern Triangle militaries.

Limited information is available about how U.S. assistance improved prosperity, governance, and security in the Northern Triangle. Agencies generally reported more information about progress toward prosperity than toward governance and security, in part because evaluations were conducted unevenly across agencies and sectors. In addition, project implementers did not consistently collect key information needed to evaluate progress, but officials noted improvements. Nevertheless, agency officials described examples of progress through technical assistance, and noted challenges, such as drought. GAO has reported that development of a monitoring and evaluation plan is key to assessing agencies' common goals and objectives, and mutually reinforcing results. While State has a monitoring and evaluation plan for the Strategy, the plan does not include activities by DOD and USDA that support the Strategy's objectives and thus does not establish a comprehensive approach to assessing progress.

The United States has provided assistance to the Northern Triangle of Central America for many years to address poverty, weak governance, and insecurity. Introduced in 2014, and updated in 2017, the U.S. Strategy for Engagement in Central America (Strategy) supports the objectives of improving prosperity, governance, and security. State coordinates implementation of the Strategy's objectives among agencies. This report examines: (1) the projects the U.S. government has implemented from fiscal years 2013 through 2018 to support the Strategy's objectives in the Northern Triangle, (2) what is known about project results, and (3) what is known about progress toward the objectives.

GAO reviewed results for a subset of 190 projects in a nongeneralizable sample of six sectors selected based on funding, country, and objective; analyzed Strategy documents and key elements of effective strategies; interviewed officials; and conducted fieldwork in the Northern Triangle.

GAO recommends that State collaborate with DOD and USDA to develop a comprehensive approach to monitoring and evaluation of projects that support Strategy objectives. State did not concur, citing lack of authority to direct other agencies' actions. GAO modified the recommendation to clarify that a collaborative effort would allow State to include information about all relevant projects as it evaluates progress under the Strategy as discussed in this report.