About 38% of U.S. adults have obesity and are at risk of developing conditions like heart disease, which are associated with increased risk of death.

There are nine FDA-approved drugs to help treat obesity. Among U.S. adults with obesity, relatively few (about 660,000/year) used an obesity drug, according to estimates for 2012–2016.

Health insurance plans might not cover obesity drugs. Some Medicare and Medicaid plans, and others that cover the drugs, may require prior authorization or may have patients try other treatment options first. However, out-of-pocket payments from the patient or their family made up most payments for these drugs.

Who pays for obesity drugs? 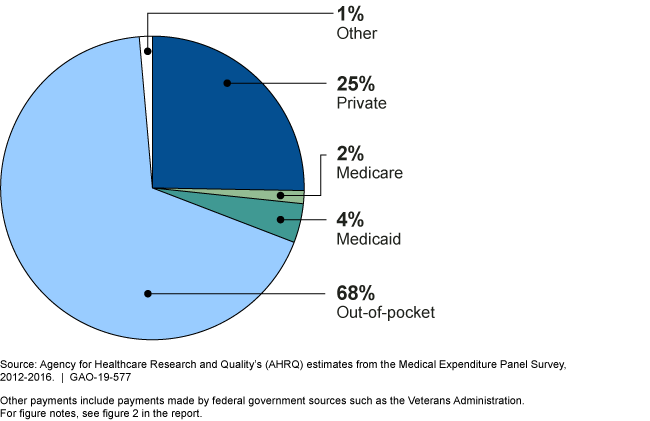 The prevalence of obesity—that is, body weight higher than what is considered a healthy weight for a given height—was about 38 percent among all U.S. adults, according to the latest available national estimates at the time of GAO's analysis. This prevalence was similar for adults with different types of health insurance.

Prevalence of Obesity among U.S. Adults by Health Insurance Type, 2013–2016 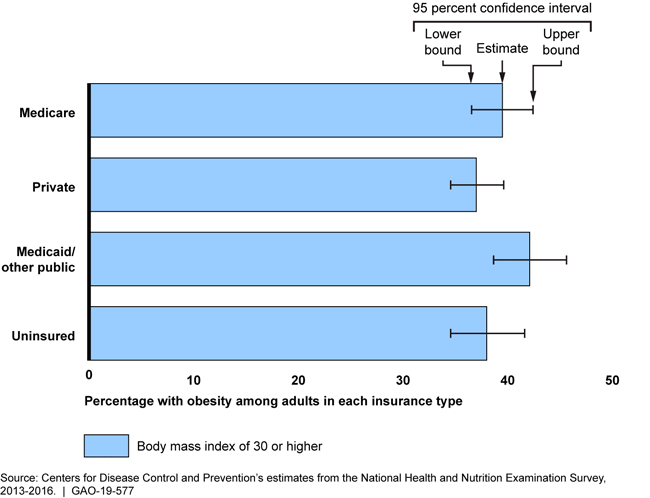 Treatment for adults with obesity may include one or more of nine prescription drugs that the Food and Drug Administration has approved for weight management (i.e., obesity drugs), though relatively few adults have used these drugs. Of an estimated 71.6 million U.S. adults with obesity, an estimated 660,000 per year, on average, used an obesity drug from 2012 through 2016, according to national estimates. Among adults who reported trying to lose weight, about 3 percent reported that they took prescription medication for weight loss from 2013 through 2016, according to national estimates.

Coverage of obesity drugs varied across different types of health insurance, including Medicare and Medicaid. Plans cited factors such as low consumer demand and strong evidence supporting other treatments in their coverage decisions. GAO's analysis of Centers for Medicare & Medicaid Services' data indicates that some Medicare prescription drug plans and state Medicaid programs reimbursed for some obesity drugs in 2016 and 2017. Coverage for private health insurance plans also varied, and plans may require the patient to obtain prior authorization for the drugs to be covered, according to officials from insurers and pharmacy benefit managers GAO interviewed. For example, officials from one insurer said that some of their plans only cover obesity drugs after a patient has tried other treatment options such as behavioral counseling.

Obesity has been associated with an increased risk of developing conditions such as heart disease, stroke, diabetes, and certain types of cancer. Treatment options for individuals with obesity include lifestyle therapy, such as diet, exercise, and behavioral counseling; obesity drugs; surgery; or a combination of these efforts. The Bipartisan Budget Act of 2018 (P.L. 115-123) included a provision for GAO to review the prevalence of obesity and the use and insurance coverage of obesity drugs.

This report examines the prevalence of obesity in the United States, and what is known about the use and health insurance coverage of obesity drugs, among other objectives.

GAO examined data from agencies within the Department of Health and Human Services (HHS) on the prevalence of obesity (using estimates for 2013 through 2016) and the use, spending, and coverage of obesity drugs; conducted a literature review of relevant studies published from January 2012 through January 2019 in peer-reviewed and other publications; reviewed drug formularies for selected health plans; and reviewed documents and interviewed officials from federal agencies and stakeholder organizations (including medical associations, advocacy groups, pharmacy benefit managers, and insurers).