The Army Corps of Engineers undertakes water resources projects to reduce the risk of damage from coastal storms, among other things. The Corps first conducts a feasibility study to determine costs, benefits, and whether the project is in the federal interest. Such studies can take years. To accelerate feasibility studies, Congress and the Corps introduced reforms.

The Corps has not fully implemented recent reforms, evaluated the impact of its reforms, or maintained complete data on its feasibility studies.

We recommended developing plans to implement remaining reforms and evaluate the impacts of reforms, and taking other actions.

A waterway with an ongoing Corps feasibility study at Colorado River Locks, TX. 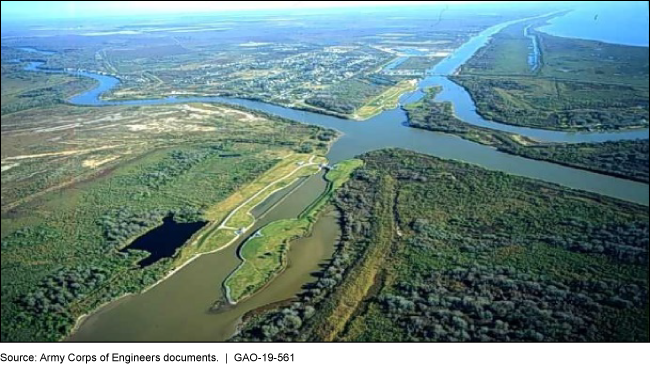 Aerial photo of the area where two rivers meet

The U.S. Army Corps of Engineers has taken steps to address some feasibility study acceleration provisions under the Water Resources Reform and Development Act of 2014 (WRRDA 2014) but not others. For example, to implement a provision related to coordination, the Corps in September 2015 issued guidance emphasizing the importance of early coordination with other federal agencies to avoid delays later in the process. However, the Corps has not taken steps to address other provisions, such as one that calls for the Corps to establish a database to make publicly available information on the status of feasibility studies, citing resource constraints. The Corps does not have a plan to address these other provisions. A plan that includes resource estimates would better position the Corps to address the remaining acceleration provisions.

The Corps regularly monitors feasibility studies and has conducted some reviews of its acceleration reforms, such as an analysis that found that some studies were too complex to complete within the agency's timing and cost requirements—i.e., within 3 years and for less than $3 million. However, the Corps has not comprehensively evaluated the reforms' impacts. Corps officials and stakeholders expressed differing views on the reforms' impacts on the costs, time frames, and quality of feasibility studies. For example, many Corps officials GAO interviewed said the reforms' overall goals to reduce studies' cost and time frames were positive, but others raised concerns, such as that the $3 million cost limitation may not be realistic for different geographic areas. Corps officials said they have not conducted a comprehensive impact review in part because they are focused on monitoring ongoing studies. These officials said they see the value in conducting such a review as they complete more studies, but they have not developed a plan to do so. Developing an evaluation plan would help the Corps conduct a timely and effective review.

Water resources development projects undertaken by the Corps—such as those to reduce the risks from coastal storms—historically have taken years or even decades to complete. To implement these projects, the Corps first conducts a feasibility study, which includes an analysis of the federal interest and the costs, benefits, and environmental impacts of a project; such studies can take several years to complete.

GAO is making three recommendations to the Department of Defense to direct the Assistant Secretary of the Army for Civil Works to (1) develop a plan with resource estimates to address the remaining WRRDA 2014 provisions, (2) develop a plan to comprehensively evaluate the impacts of the agency's acceleration reforms, and (3) clarify its policy to help ensure district officials enter data on required milestones for feasibility studies in its central data system. The agency concurred with the recommendations.