A majority of Medicare's 39 million beneficiaries in 2017 had a serious condition, such as diabetes or heart disease. Treatment in these kinds of cases may require planning and coordination among an array of medical specialists.

We looked at how doctors and other health care providers bill Medicare for care planning and how much was spent on these services.

We found at least 58 Medicare codes providers can use to bill for some aspect of care planning—with 13 of them specifically for care planning. In 2017, spending on these 13 codes was about $467 million. 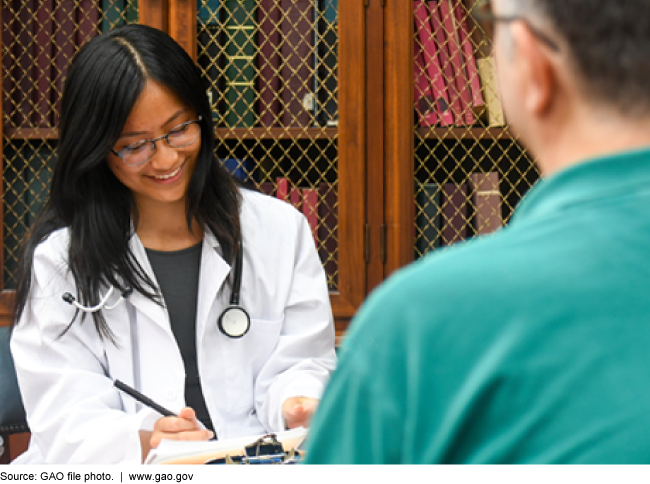 The 2018 Bipartisan Budget Act (BBA) defined longitudinal comprehensive care planning (LCCP) as services involving an interdisciplinary team of providers who develop and communicate a care plan to Medicare beneficiaries diagnosed with a serious or life-threatening illness. GAO identified at least 58 billing codes in Medicare's physician fee schedule that could be used by providers to bill for services that cover some or all of the LCCP service components as defined in the 2018 BBA —referred to by GAO as LCCP-type services. The 58 billing codes may be used individually or in combination, depending on a beneficiary's medical needs. Stakeholders representing providers told GAO their members generally use one or a combination of these codes to bill for LCCP-type services.

Medicare Spending on Narrowly-Defined Services, by Type of Service, 2013-2017

Medicare's physician fee schedule contains over 8,000 billing codes for office visits, surgical procedures, or other services provided to beneficiaries. Some provider groups have concerns that these codes do not sufficiently account for the LCCP-type services they provide to Medicare beneficiaries with complex medical needs.

The BBA included a provision that GAO examine billing codes that may be used for LCCP-type services for beneficiaries with a serious or life-threatening illness.

GAO identified, among other things, (1) existing Medicare physician fee schedule billing codes that can be used to bill LCCP-type services; and (2) trends in Medicare spending on these services from 2013 through 2017.

GAO reviewed Centers for Medicare & Medicaid Services (CMS) billing code manuals and American Medical Association (AMA) code descriptors to identify existing codes containing key components of LCCP-type services; analyzed Medicare Part B claims data from 2013 to 2017 (the most recent available at the time of GAO's review); and interviewed officials from CMS and 19 stakeholders, including the AMA, national physician groups, and other provider groups that had previously given input on the topic to Congress.

GAO provided a draft of this report to the Department of Health and Human Services (HHS). In response, HHS provided technical comments, which GAO incorporated as appropriate.