Can women and minorities get the loans they need to buy and operate farms?

According to USDA survey data, these "socially disadvantaged" farmers and ranchers get a disproportionately small share of farm loans. More detailed information isn’t available on farm lending to these groups because lenders generally aren't allowed to record an applicant's race or sex.

Advocates, industry representatives, and federal officials told us socially disadvantaged farmers and ranchers may have trouble getting loans because they have lower-revenue farms and weaker credit histories on average. Some advocates also allege ongoing discrimination in farm lending. 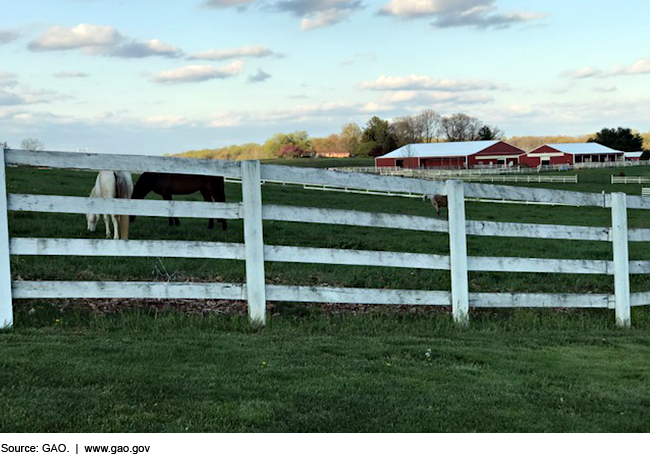 Photo of a farm

Information on the amount and types of agricultural credit to socially disadvantaged farmers and ranchers (SDFR)—which the U.S. Department of Agriculture (USDA) defines as members of certain racial and ethnic minority groups and women—is limited. Comprehensive data on SDFRs' outstanding agricultural debt are not available because regulations generally prohibit lenders from collecting data on the personal characteristics of applicants for loans other than certain mortgages. A Consumer Financial Protection Bureau rulemaking pursuant to a provision in the Dodd-Frank Wall Street Reform and Consumer Protection Act that requires collection of such data in certain circumstances would modify this prohibition for certain loans, possibly including some agricultural loans. The bureau delayed the rulemaking in 2018 due to stated resource constraints and other priorities, but reported that it plans to resume work on the rule later in 2019. An annual USDA survey of farmers provides some insights into agricultural lending to SDFRs but, according to USDA, may underrepresent SDFRs compared to more inclusive estimates from the 2017 Census of Agriculture. In the 2015–2017 surveys, SDFRs represented an average of 17 percent of primary producers in the survey, but they accounted for 8 percent of outstanding total agricultural debt. Loans to purchase agricultural real estate accounted for most of SDFRs' outstanding debt (67 percent).

SDFRs reportedly face a number of challenges that hamper their ability to obtain private agricultural credit. According to SDFR advocacy groups, lending industry representatives, and federal officials, SDFRs are more likely to operate smaller, lower-revenue farms, have weaker credit histories, or lack clear title to their agricultural land, which can make it difficult for them to qualify for loans. SDFR advocacy groups also said some SFDRs face actual or perceived unfair treatment in lending or may be dissuaded from applying for credit because of past instances of alleged discrimination. Additionally, they noted that some SDFRs may not be fully aware of credit options and lending requirements, especially if they are recent immigrants or new to agriculture.

Private lenders and federal agencies conduct outreach to SDFRs, but the effectiveness of these efforts in increasing lending is unknown. For example, lenders have sponsored educational events targeted to SDFRs and translated marketing materials for non-English speakers. Farm Credit Administration regulations require Farm Credit System lenders to prepare marketing plans that include specific outreach actions for diversity and inclusion. The Farm Credit Administration examines these plans and indicated that it has prescribed corrective actions in some cases. However, the Farm Credit Administration does not require lenders to meet specific lending goals, and the regulatory data restrictions noted previously constrain the Farm Credit Administration's ability to assess the effect of outreach efforts. USDA conducts outreach to SDFRs and lenders about its loan programs and collects data on the personal characteristics of loan applicants. However, USDA officials said they face challenges evaluating the impact of their outreach efforts, in part because outreach participants are reluctant to provide their demographic information.

In 2017, there were about 2 million farm and ranch operations nationwide. Farmers and ranchers often require loans to buy agricultural real estate, make capital improvements, and purchase supplies and equipment. However, minorities and women comprise a disproportionately small share of agricultural producers, and certain minority groups have alleged discrimination in obtaining agricultural credit. Most agricultural lending is done by either commercial banks or the Farm Credit System, a network of lenders regulated by the Farm Credit Administration. USDA accounts for a small share of agricultural credit, but it makes direct loans and guarantees loans made by private lenders. USDA and Farm Credit System lenders have responsibilities to expand credit access.