Production of oil and natural gas in federal waters generated about $90 billion in revenue for the government from 2006 through 2018. The Bureau of Ocean Energy Management leases exploration rights to companies and sets royalty rates on production.

We found the bureau systematically underestimates the value of offshore oil and gas leases, resulting in the government collecting hundreds of millions of dollars less than it otherwise could.

We recommended ways the bureau could better ensure receipt of fair market value for these leases.

Management of federal oil and gas resources is a topic on our High Risk List. 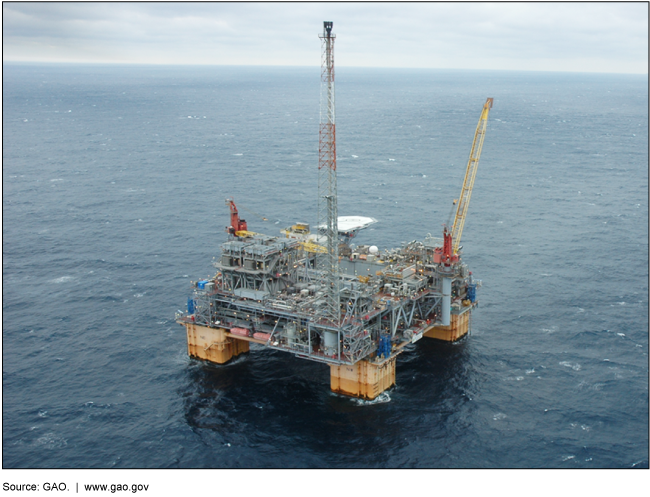 GAO's analysis indicates that changes in the price of oil and in royalty rates drive changes in the amount companies in the offshore oil and gas industry bid for leases (the amount paid upfront at auction for the right to explore and develop offshore tracts of land). Specifically, between May 1985 and June 2018, peaks in industry bidding coincided with higher oil prices. Additionally, when the Department of the Interior's (Interior) Bureau of Ocean Energy Management (BOEM) offered leases at lower royalty rates, industry bid somewhat higher amounts per acre. For example, certain leases were sold from 1996 through 2000 with no royalties on initial volumes of production, which GAO estimates resulted in BOEM collecting, at most, nearly $2 billion in additional bid revenue. However, bureau estimates indicate these leases resulted in about $18 billion in foregone royalties through 2018.

Unreasonably high depreciation. BOEM forecast that tracts would lose a median of 23 percent of their value in between sales, leading the bureau to accept lower bids because it determined the tracts might be worth even less in the future. Bureau officials told GAO that lower future values are generally due to BOEM discounting the delayed collection of revenue. However, BOEM's forecasted depreciation increased even though tracts are now available twice as frequently as they were prior to August 2017, reducing the time for discounting. Officials said they were unaware of the high rates and the issue warrants further examination. Enlisting a third party to examine the extent to which the bureau's use of delayed valuations assures the receipt of fair market value, and making changes as appropriate, would help BOEM mitigate risks of continuing to accept bids based on poor information on tracts' future values.

Lowered valuations. BOEM officials told GAO that they lower some initial valuations that are “slightly above” industry's bids and which would therefore be rejected per procedures to assure fair market value. Officials said they prefer to accept bids unless there is high certainty that the bids are inadequate. However, GAO identified bias, or statistical anomalies, where BOEM lowered many valuations that were initially higher than industry's bids. Specifically, from March 2000 through June 2018, BOEM rejected 27 bids for tracts that it ultimately valued at up to double industry's bid whereas it accepted 359 bids in which industry's bid was up to double BOEM's valuation. Tracts for rejected bids are, on average, subsequently sold for more than twice the initial rejected amount, suggesting that BOEM could be forgoing hundreds of millions of dollars in bid revenue by accepting bids that are too low.

Production of oil and natural gas from offshore leases is a significant source of federal revenue, totaling almost $90 billion from 2006 through 2018. BOEM is required to seek a fair return from offshore leasing and production activities in federal waters. Companies generally pay (1) bids for leases for the right to develop tracts, (2) rents on leased but undeveloped tracts, and (3) royalties on revenues from the sale of oil and gas produced from leases. BOEM holds auctions to award leases to the company offering the highest bid so long as the bureau determines the bid represents fair market value.

GAO was asked to examine issues related to offshore federal oil and gas leasing. This report, among other objectives, (1) describes the effect of oil prices and royalty rates on industry bids for leases and (2) examines the extent to which BOEM's valuation process assures receipt of fair market value. GAO reviewed laws, policies, and regulations; interviewed BOEM officials; and developed an empirical model using BOEM data to analyze the effect of royalty rates and other factors on industry bidding.

GAO is making four recommendations, including that BOEM (1) enlist an independent third party to examine whether the use of delayed valuations assures the receipt of fair market value and (2) take steps to ensure its bid valuation process is not biased toward lowering valuations. Interior disagreed with the first and partially agreed with the second, disagreeing with GAO's characterization of BOEM's process. GAO maintains the recommendations are valid as discussed in the report.