The Head Start program helps children from low-income families get ready to attend school. We attempted to enroll fictitious children in 15 Head Start centers using information that should have disqualified our applications, such as pay stubs that exceeded income requirements. We found:

Potential fraud at 5 centers. For example, in 3 cases, we retrieved our applications and found they had been doctored to exclude disqualifying information

We made 6 recommendations, including that Head Start assess fraud risk. 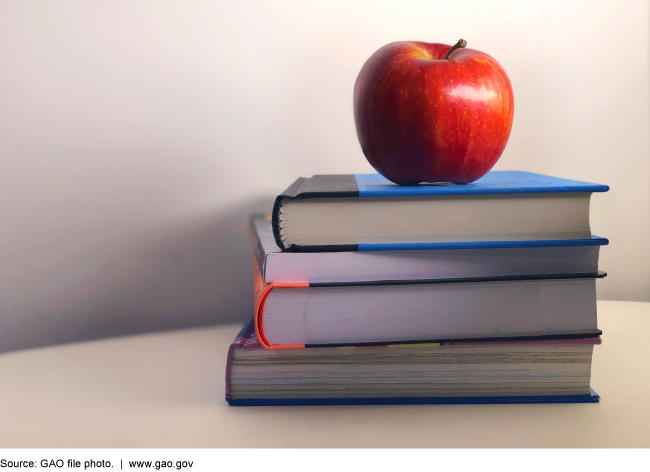 A red apple on top of four textbooks

The Office of Head Start (OHS), within the Department of Health and Human Services, has not conducted a comprehensive fraud risk assessment of the Head Start program in accordance with leading practices. Such an assessment could help OHS better identify and address the fraud risk vulnerabilities GAO identified.

OHS has not always provided timely monitoring of grantees, leading to delays in ensuring grantee deficiencies are resolved. In the period GAO examined, OHS did not consistently meet each of its three timeliness goals for (1) notifying grantees of deficiencies identified during its monitoring reviews, (2) confirming grantee deficiencies were resolved, and (3) issuing a final follow-up report to the grantee. In October 2018, OHS implemented new guidance (called “workflows”) that documents its process for notifying, following up, and issuing final reports on deficiencies identified by its monitoring reviews. However, OHS has not established a means to measure performance or evaluate the results of its new workflows to determine their effectiveness.

Vulnerabilities exist for ensuring grantees provide services to all children and pregnant women they are funded to serve. For example, OHS officials said grantees have the discretion to allow children with extended absences—sometimes of a month or more, according to GAO’s analysis—to remain counted as enrolled. OHS officials told GAO that a child’s slot should be considered vacant after 30 days of consecutive absences, but OHS has not provided that guidance to grantees. Without communicating such guidance to grantees, OHS may not be able to ensure slots that should be considered vacant are made available to children in need. Further, OHS risks paying grantees for services not actually delivered.

The Head Start program, overseen by OHS, seeks to promote school readiness by supporting comprehensive development of low-income children. In fiscal year 2019, Congress appropriated over $10 billion for programs under the Head Start Act, to serve approximately 1 million children through about 1,600 Head Start grantees and their centers nationwide. This report discusses (1) what vulnerabilities GAO’s covert tests identified in selected Head Start grantees’ controls for program eligibility screening; (2) the extent to which OHS provides timely monitoring of grantees; and (3) what control vulnerabilities exist in OHS’s methods for ensuring grantees provide services for all children and pregnant women they are funded to serve. GAO conducted 15 nongeneralizable covert tests at Head Start centers in metropolitan areas. GAO selected only centers that were underenrolled to be sure we did not displace any actual, eligible children. GAO also reviewed OHS timeliness goals and data for the period October 2015 through March 2018, and used attendance data to verify enrollment data reported for early 2018 for a nongeneralizable sample of nine grantees.

GAO makes six recommendations, including that OHS perform a fraud risk assessment, develop a system to evaluate the effectiveness of its new workflows, and communicate guidance on when a student’s slot should be considered vacant due to absenteeism. OHS concurred with four recommendations, but did not concur with two. GAO believes the recommendations remain valid.