We also found that

Pharmacy benefit managers' compensation for working with plan sponsors primarily consisted of fees from plan sponsors, rather than being allowed to keep a portion of the rebates they negotiated 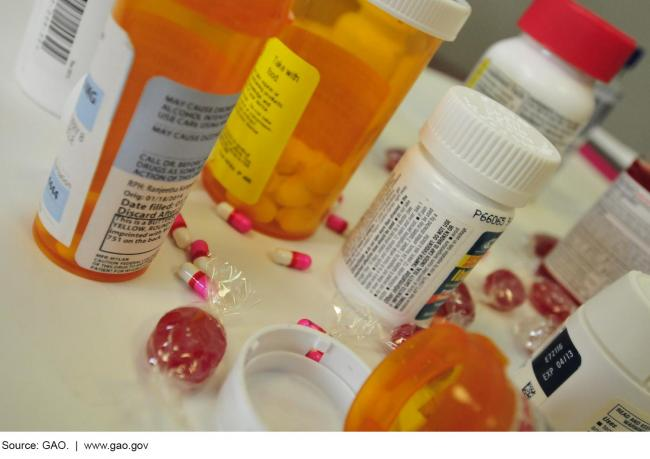 PBMs primarily earned Part D revenue through a volume-based fee paid by plan sponsors based on PBM-processed claims; a per-member, per-month fee paid by plan sponsors; or a combination of the two. PBMs also earned revenue from the rebates they negotiated with manufacturers for Part D drugs, which accounted for $18 billion of the $26.7 billion in rebates in 2016. PBMs retained less than 1 percent of these rebates, passing the rest to plan sponsors. Plan sponsors in turn may use rebates to help offset the growth in drug costs, helping control premiums for beneficiaries.

Total expenditures for the Medicare Part D drug program exceeded $100 billion in 2016. Part D plan sponsors may use a PBM to provide drug benefit management services for Part D coverage, such as negotiating drug rebates and other price concessions and paying pharmacy claims. Policymakers have sought a better understanding of PBMs' roles in the drug supply chain and plans' and PBMs' efforts to manage Part D drug spending and use.

GAO was asked to examine the role of PBMs in the Part D program. This report examines, among other objectives, (1) the extent to which Part D plan sponsors use PBMs, (2) trends in rebates and other price concessions obtained by both PBMs and plan sponsors for Part D drugs, and (3) how PBMs earn revenue for services provided to Part D plans.

GAO analyzed Centers for Medicare & Medicaid Services (CMS) data on Part D plan sponsors' use of PBMs in 2016 as well as CMS drug expenditure, pricing, and rebate and other price concession data for all Part D drugs from 2014 through 2016 (the most recent available data at the time of our analysis). GAO reviewed service agreements between Part D plan sponsors and PBMs that were approved by CMS from January 2016 through May 2018 and had the highest enrollment as of June 2018. GAO spoke with CMS officials and 38 stakeholder groups including PBMs, Part D plan sponsors, pharmacy representatives and drug manufacturers.