We reviewed the effects of the Renewable Fuel Standard, which requires biofuels to be blended into U.S. transportation fuels in increasing volumes.

The standard was associated with modest gas price increases in areas outside of the Midwest. Most corn ethanol—the most common U.S. biofuel—is produced in the Midwest, so other regions had to pay for shipping and storage.

The standard was intended to reduce greenhouse gas emissions, but has had little effect to date. It will likely not meet the emissions goals set for it through 2022, largely because advanced biofuels—which reduce emissions more effectively—haven't been produced as expected. 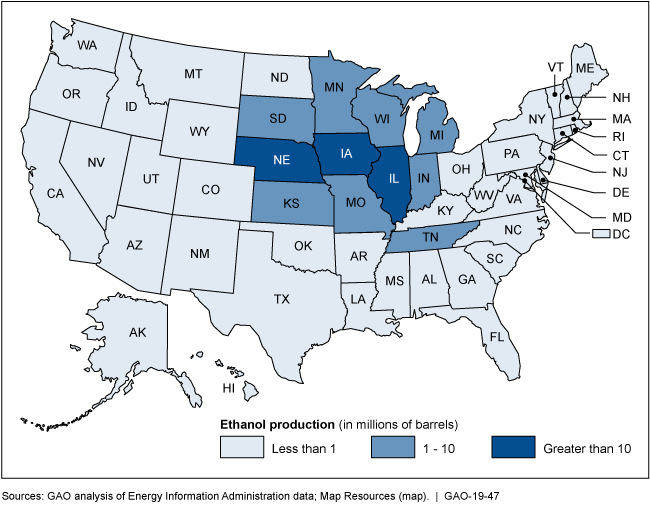 Map of the U.S. showing that Nebraska, Iowa, and Illinois produced the most ethanol.

Effect on prices. Evidence from studies, interviews with experts, and GAO's analysis suggest that the nationwide Renewable Fuel Standard (RFS) was likely associated with modest gasoline price increases outside of the Midwest and that these price increases may have diminished over time. Variations in these gasoline price effects likely depended, in part, on state-by-state variation in the costs to transport and store ethanol. For example, the Midwest was already producing and blending ethanol when the RFS came into effect, so that region had lower transportation costs and had already invested in necessary storage infrastructure. Other regions began blending ethanol later to meet the RFS's requirements, thereby incurring new transportation and storage infrastructure costs that resulted in gasoline prices that were several cents per gallon higher than they otherwise would have been.

In addition, experts told GAO that the RFS caused an initial increase in refining investment costs that, over the long term, reduced refining costs for gasoline. Specifically, once all locations had made the infrastructure investments and most gasoline blendstock produced was consistent with blending ethanol then there would be two continuing effects: (1) the transportation and blending costs of ethanol, which would tend to push retail prices higher and depend on the distance traveled and the modes of transport, and (2) the lower cost of producing lower octane blendstock. The former effect might dominate for locations far from the production source of ethanol and for which more costly modes of transport were used, while the lower blendstock costs might dominate for locations close to the production source of ethanol and/or those that have low transportation costs.

Further, the RFS is unlikely to meet the greenhouse gas emissions reduction goals envisioned for the program through 2022. Specifically, GAO reported in November 2016 that advanced biofuels, which achieve greater greenhouse gas reductions than conventional corn-starch ethanol, have been uneconomical to produce at the volumes required by the RFS statute so the Environmental Protection Agency (EPA) has waived most of these requirements (see figure).

Volumes of Advanced Biofuels to Be Blended into Domestic Transportation Fuel, as Set by the Renewable Fuel Standard Statute and by EPA, 2010 through 2019 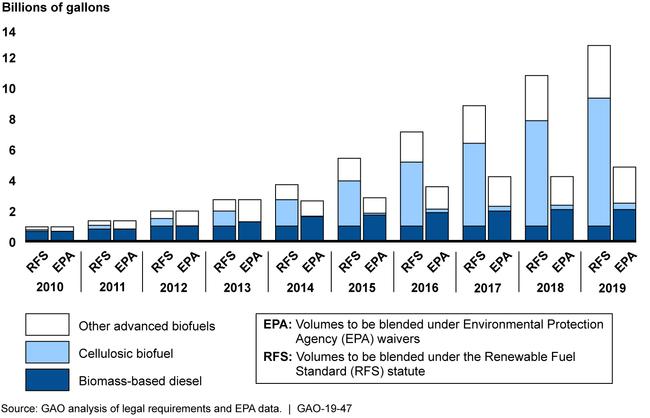 Renewable identification numbers. EPA uses renewable identification numbers (RINs) to regulate industry compliance with RFS requirements for blending biofuels into the nation's transportation fuel supply. In GAO's March 2014 report on petroleum refining, GAO noted that the RFS had increased compliance costs for the domestic petroleum refining industry or individual refiners. GAO reported that corn-based ethanol RIN prices had been low—from 1 to 5 cents per gallon from 2006 through much of 2012—but in 2013, RIN prices increased to over $1.40 per gallon in July before declining to about 20 cents per gallon as of mid-November 2013. Since the March 2014 report, corn-ethanol RIN prices have experienced more periods of volatility. Most experts and stakeholders GAO interviewed recently stated that RINs had either a small effect on prices or no effect on prices, though a few disagreed. Finally, GAO's past work, as well as EPA analysis, has identified several issues of concern with RINs, including possible fraud in the market and concerns about the effect on small refiners, price volatility, and the point of obligation.

Congress established the RFS in 2005 and expanded it 2 years later. The RFS generally mandates that transportation fuels—typically gasoline and diesel—sold in the United States contain increasing amounts of biofuels. In addition, the RFS is designed to reduce greenhouse gas emissions by replacing petroleum-based fuels with biofuels expected to have lower associated greenhouse gas emissions. The most common biofuel currently produced in the United States is corn-starch ethanol, distilled from the sugars in corn. EPA uses RINs associated with biofuels blended with petroleum-based fuels to regulate compliance with the program.

In 2014, GAO found that refiners' costs for complying with the RFS had increased, and in 2016, GAO found that greenhouse gas emissions are unlikely to be reduced to the extent anticipated because production of advanced biofuels—which reduce greenhouse gas emissions more than corn-starch ethanol—has not kept pace with the yearly increases or the target of 21 billion gallons by 2022 called for by the statute. GAO was asked to review additional issues related to the effects of the RFS.

This report examines what is known about (1) the effect the RFS has had to date on retail gasoline prices in the United States and (2) the RFS's effect on greenhouse gas emissions and whether the RFS will meet its goals for reducing those emissions. The report also provides information about RINs.

To address the likely effects of the RFS on gasoline prices, GAO reviewed studies and interviewed experts and industry stakeholders, and conducted a statistical analysis of state ethanol mandates that were similar to the mandates of the RFS. GAO selected the experts based on their published work and recognition in the professional community. GAO selected stakeholders representing a range of perspectives, including stakeholders from the renewable fuels, petroleum, and agricultural industries, as well as from environmental groups.

Because the RFS was implemented on a nationwide basis at the same time that other factors, such as the global price of crude oil and domestic demand for retail gasoline, were affecting retail gasoline prices across the nation, it is not possible to directly isolate and measure the effect the RFS had on gasoline prices nationwide given data available to GAO. Instead GAO developed and extensively tested an econometric model that estimated the effects on retail gasoline prices of state ethanol mandates. These state mandates are similar to the RFS but were put in place voluntarily by states before the RFS led to widespread ethanol blending in every state. This model estimated how ethanol mandates affected gasoline prices in these five states. These estimates suggest the RFS likely had effects in states that did not have state-wide mandates. These states incrementally blended ethanol because of the increasing volumes of ethanol required to be blended nationally by the RFS.

Regarding the RFS's effect on greenhouse gas emissions, GAO interviewed 13 experts in government and academia. GAO selected these experts based on their published work, prior GAO work, and recommendations from other experts.

During the course of the work, GAO gathered information on the topic of RINs through interviews, a review of relevant literature, and prior GAO work.

GAO makes no recommendations in this report. In commenting on a draft of this report, USDA disagreed with GAO's finding that the RFS has had a limited effect on greenhouse gas emissions, citing research on the effects of ethanol on reducing emissions generally. GAO reported on the specific effects of the RFS on emissions. USDA also criticized GAO's methodology using experts' views. GAO employed that method to reach consensus among those with a range of perspectives. DOE and EPA did not comment on the draft report.