The Department of Energy is responsible for cleaning up contaminated soil, water, facilities, and radioactive waste from nuclear weapons production.

This testimony discusses, among other things, the estimated cost of the remaining cleanup (the environmental liability) and DOE's efforts.

We found the estimated liability for DOE's Office of Environmental Management, which is responsible for most of the cleanup, grew by $241 billion from 2011-2018 despite $48 billion in spending. The office also provided Congress with inconsistent and misleading information.

The government's environmental liability is a topic on our High Risk List. 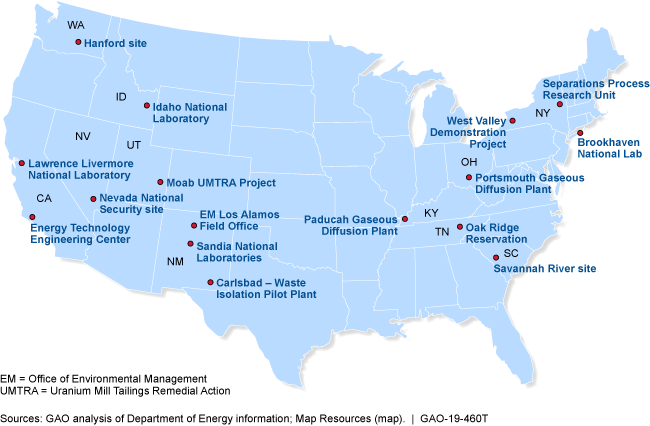 In fiscal year 2018, the Department of Energy's (DOE) estimated environmental liability—that is, its estimated probable costs of future environmental cleanup—was $494 billion. Of this amount, DOE's Office of Environmental Management (EM)—which is responsible for most of DOE's cleanup activities—accounted for $377 billion. EM's portion of the liability reflects cleanup estimates for 16 sites across the United States. Two of these, the Hanford site in Washington and Savannah River site in South Carolina, have most of EM's nuclear waste stored in tanks, which is particularly costly and complicated to treat. EM's environmental liability grew by $214 billion in fiscal years 2011 through 2018, even though EM spent over $48 billion on cleanup. GAO found that this liability may continue to grow for several reasons:

EM's environmental liability does not include the costs of all future cleanup responsibilities. For example, as of April 2018, DOE and its contractor had not negotiated a cost for completing a large waste treatment facility, called the Waste Treatment and Immobilization Plant, at the Hanford site.

About 30 to 60 percent of EM's cleanup budget goes toward recurring activities necessary to maintain the sites—such as physical security and infrastructure maintenance—rather than toward reducing EM's environmental liability.

EM officials have not analyzed the root causes of the cost growth.

GAO found that EM has not resolved long-standing management challenges. First, EM does not have a program-wide cleanup strategy and relies primarily on individual sites to locally negotiate cleanup activities and establish priorities, which does not always balance overall risks and costs. For example, the Hanford and Savannah River sites plan to treat similar radioactive tank waste differently, with Hanford's efforts possibly costing tens of billions more than Savannah River's. In addition, EM manages most of its cleanup work as operations activities, under less stringent requirements than other environmental remediation projects. For example, operations activities are not subject to independent oversight outside EM, and therefore DOE cannot hold EM accountable for its performance.

GAO also found that EM has not consistently reported to Congress on its cleanup efforts as required, and the information EM has reported has been incomplete or inaccurate. Under the National Defense Authorization Act for Fiscal Year 2011, EM must annually report estimated costs and detailed funding needs for future cleanup activities. EM's fiscal year 2017 submission to Congress was only the second one since fiscal year 2011, and it did not include a detailed list of upcoming activities or funding needed to meet those activities. Finally, GAO found that information provided in EM's fiscal year 2016 to 2018 budget requests did not reflect the funding some DOE officials said it needs to meet its milestones. Budget requests for those years were for at least $1.5 billion less than the $8 billion a senior EM official said EM anticipated was needed annually to meet milestones called for in legally enforceable agreements.

EM's cleanup responsibilities include remediating contaminated soil and groundwater, deactivating and decommissioning contaminated facilities, and treating millions of gallons of radioactive waste that resulted from nuclear weapons produced during World War II and the Cold War.