Since USAID’s Global Development Lab started in 2014, it has sought innovative solutions to international development problems such as hunger and illiteracy. The Lab has a goal of supporting some efforts with outside contributions from private and public partners.

We examined how the Lab uses and reports its funding. We found:

Some of the Lab’s public reporting on outside contributions was outdated or incomplete.

To improve transparency, we recommended the Lab revise internal guidance to ensure up-to-date and complete reporting on outside contributions. 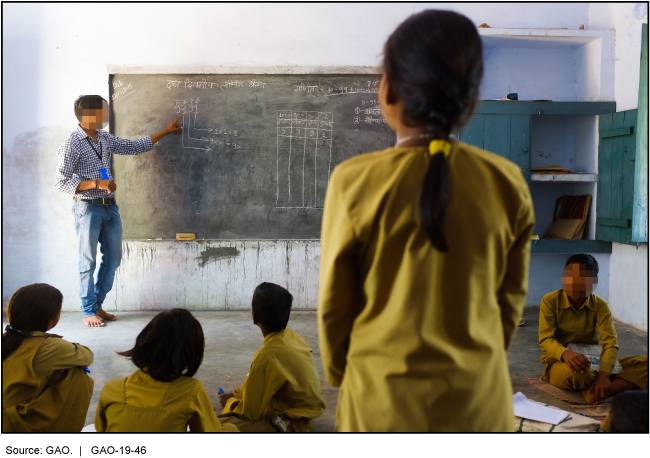 This is a photo of children in a classroom with a barefoot teacher in front of a blackboard.

The U.S. Agency for International Development's (USAID) Global Development Lab (the Lab) has programs and activities for each of its five strategic objectives: science, technology, innovation, and partnerships (STIP) and agency integration of STIP. The Lab comprises five centers and two support offices (see figure). The centers house more than 25 Lab programs focused on issues such as development research, digital development, innovation ventures, and private sector engagement. The Lab's funding for its programs has generally been decreasing, as have its staffing numbers, since fiscal year 2015. USAID allocations of program funds to the Lab decreased from $170.7 million in fiscal year 2015 to $77 million in fiscal year 2017.

Although the Lab has documented its oversight of awards that include non-USAID contributions, some data it collects for these contributions are outdated and its public reporting of such data lacks transparency.

For awards GAO reviewed, the Lab consistently documented its compliance with key award oversight requirements. However, its Internal Guide to Accounting for Leverage (internal guide) does not include instructions for ensuring the data for these contributions are current. As a result, GAO found the Lab's management information system contained outdated data for non-USAID contributions in 10 of 24 awards GAO reviewed.

USAID policy and standards for internal control in the federal government require the use and communication of timely and reliable information. Revising the Lab's internal guide to include instructions for updating data on non-USAID contributions and requiring the Lab's public reporting to disclose the types of contributions represented would help the Lab ensure accuracy and transparency in the information it reports to Congress and the public.

The Lab was created as a USAID bureau in April 2014. The Lab was intended to institutionalize and improve USAID's ability to harness and leverage science, technology, innovation, and partnerships in addressing development issues and goals worldwide. The Lab supports projects and activities and announces, issues, and manages awards—or funding opportunities—for innovators to propose new ideas, approaches, and technologies. The Lab also incorporates external (i.e., non-USAID) contributions into its programming.

Senate Report 114-290 included a provision for GAO to review the Lab. GAO's report examines, among other things, (1) the Lab's programs, funding, and staffing resources and (2) the extent to which the Lab has documented its oversight of awards with non-USAID contributions and clearly reported these contributions. GAO reviewed and analyzed agency documents and interviewed agency officials in Washington, D.C., and from six missions. GAO also analyzed selected Lab documentation for fiscal years 2014 through 2017.

USAID concurred with both recommendations.