The Departments of Defense and Homeland Security have formed task forces to combat the flow of illicit drugs into the United States. Among other things, these task forces may help coordinate the counterdrug efforts of military and federal law enforcement agencies.

The 5 task forces we assessed coordinate their activities in a manner that helps minimize duplication of effort. However, only 1 had measures to determine the effectiveness of its counterdrug activities, such as an estimate of the percentage of smuggling attempts that task force efforts disrupted.

We made 3 recommendations to establish or improve measurements of performance. 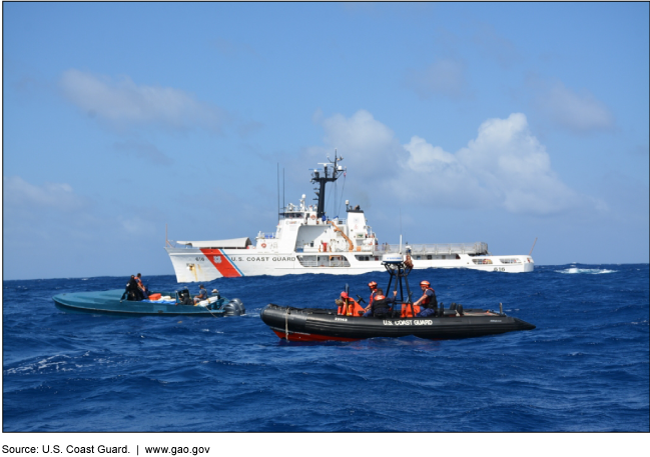 Coast Guard boats and agents on the water during an operation.

Many federal agencies are involved in efforts to reduce the availability of illicit drugs by countering the flow of such drugs into the United States. Among them are the Department of Defense (DOD), which has lead responsibility for detecting and monitoring illicit drug trafficking into the country, and the Department of Homeland Security (DHS), which is responsible for securing U.S. borders to prevent illegal activity. DOD and DHS lead and operate task forces—Joint Interagency Task Force (JIATF)-South, JIATF-West, and three DHS Joint Task Forces (JTF)—to coordinate and conduct counterdrug missions and activities. Task force officials reported that the task forces coordinated effectively with each other when they had shared purposes and overlapping or shared geographical boundaries (see map). The task forces also used coordination mechanisms that align with best practices, such as working groups and liaison officers, to minimize duplication of their missions and activities. 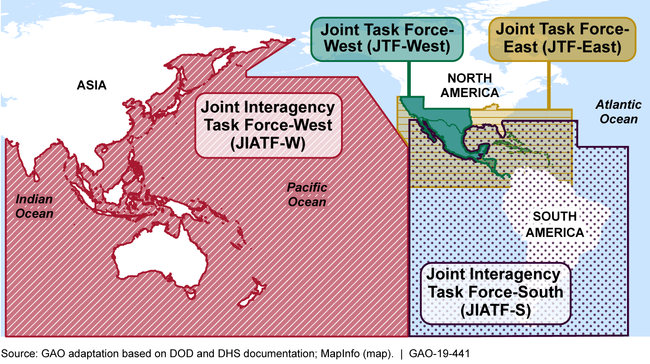 Note: DHS also has JTF-Investigations, which is a functional task force with no geographic area of responsibility.

The U.S. government has identified illicit drugs, as well as the criminal organizations that traffic them, as significant threats to the United States. In 2017, over 70,000 people died from drug overdoses, according to the Centers for Disease Control and Prevention. DOD and DHS created joint task forces to help facilitate and strengthen interagency efforts in combating the flow of illicit drugs, particularly in the maritime domain.

GAO was asked to review the structure of these task forces and their ability to coordinate and conduct missions effectively. Among other objectives, this report (1) assesses the extent to which the task forces coordinate effectively to minimize duplication, and (2) examines how the task forces measure the effectiveness of their missions and activities. GAO reviewed and assessed documentation on the task forces' missions, coordination efforts, and performance assessments and compared them to best practices from prior work, departmental guidance, and federal internal control standards. GAO also met with task force officials to discuss and observe planning and coordination activities.