Hardrock minerals such as copper and zinc play an important role in the U.S. economy, and are needed in multiple industries, including defense, electronics, and energy.

Many of these minerals have increasingly come from outside the United States. The U.S. Geological Survey calculates our dependence on mineral imports each year, which can help identify potential supply disruptions.

Our report includes a description of trends in U.S. reliance on imports for 15 hardrock minerals from 1990 through 2017. For example, since 1997 the U.S. has relied entirely on imports for fluorspar, which is used to produce aluminum. Mexico is the primary supplier. 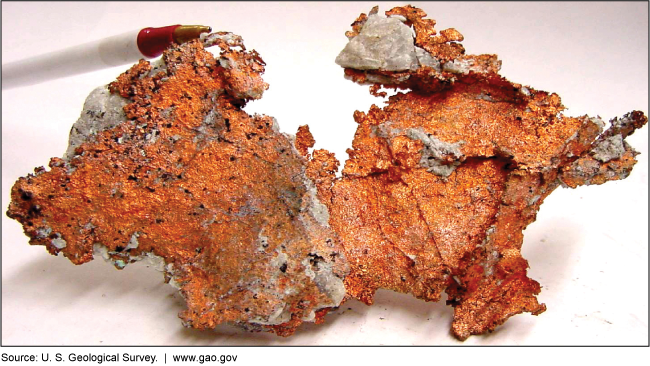 From 1990 through 2017, the U.S. reliance on imports of 15 hardrock minerals—as measured by the net import reliance percentage—has varied. Net import reliance percentage is one factor in determining whether a mineral is considered to be critical, as that percentage can help identify the potential for supply disruption of a particular mineral. Based on data from the United States Geological Survey (USGS), an agency within the Department of the Interior (Interior), these percentages generally increased for six of the 15 hardrock minerals (copper, magnesium compounds, magnesium metal, perlite, silver, and zinc); generally decreased for four minerals (gypsum, palladium, platinum, and tungsten); remained generally constant for two minerals (fluorspar and gold); or fluctuated with no long-term discernable trend for the remaining three minerals (barite, lead, and nickel).

GAO analysis of USGS data over this time period shows that the net import reliance percentages have averaged over 50 percent from 1990 through 2017 for eight of the 15 minerals GAO examined (barite, fluorspar, nickel, palladium, platinum, silver, tungsten, and zinc). A net import reliance percentage of 60 for a particular mineral indicates that 60 percent of apparent U.S. consumption is met through net imports—that is, imports minus exports, accounting for adjustments in domestic stocks. The remaining 40 percent of apparent U.S. consumption is met by U.S. domestic production. Although a net import reliance percentage greater than 50 percent is considered to be high, it should not always be construed to pose a potential supply risk, according to USGS officials. Specifically, if the import source for a particular mineral is a nation with whom the United States has reliable trade relations, the risk of a supply disruption is lessened.

Six of the 15 hardrock minerals included in GAO's review are on Interior's list of critical minerals to the United States: barite, fluorspar, magnesium metal, palladium, platinum, and tungsten. Of these, four (barite, fluorspar, palladium, and platinum) have average net import reliance percentages of over 50 percent for at least the last 10 years covered in GAO's review—2008 through 2017. For example, barite, which has consistently had a net import reliance percentage greater than 70 since 2000, is used in oil and gas drilling and radiation shielding, among other applications. China is the top producer and supplier of barite to the United States, according to a USGS report. In addition, the United States has relied entirely on imports of fluorspar to meet apparent consumption since 1997. Fluorspar is used to make chemicals for aluminum production, semiconductor manufacturing, and uranium processing, among other things. Mexico is the primary supplier to the United States for this mineral, although China is the leading producer of it worldwide.

Hardrock minerals play an important role in the U.S. economy, contributing to multiple industries, including transportation, defense, aerospace, electronics, energy, agriculture, construction, and health care. Over the past six decades, many of these minerals have been sourced increasingly from outside the United States, according to USGS.