Nuclear terrorism remains among the most significant threats to the United States and other nations. Nuclear materials stolen from poorly secured facilities could be used for a nuclear device. The International Atomic Energy Agency’s nuclear security work includes helping countries protect these facilities.

Among other things, we found the agency’s nuclear security program:

We recommended the agency address these and other concerns. 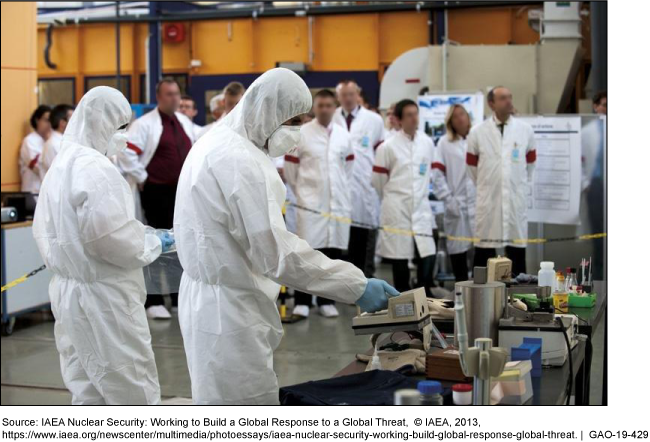 The International Atomic Energy Agency (IAEA) carries out its nuclear security program under its Division of Nuclear Security through four subprograms. IAEA activities under these subprograms include developing guidance, providing training, and assisting countries in enhancing nuclear and radiological material security.

Nuclear terrorism remains a significant threat to the security of the United States and its allies and partners. U.S. efforts to prevent nuclear terrorism include working with IAEA, an autonomous international agency affiliated with the United Nations. The Department of State coordinates the United States' policy with and financial contributions to IAEA. IAEA's nuclear security program aims to assist countries in enhancing the physical protection, control, and accounting of their nuclear and radiological material and nuclear facilities.

GAO is making five recommendations to the Department of State, including that it work with IAEA to develop guidelines for prioritizing IAEA's nuclear security activities, develop program baselines and targets, and work with the United States and other member states to analyze options to stabilize nuclear security funding. State concurred with all five recommendations.