U.S. Customs and Border Protection employs about 45,000 law enforcement personnel. Its duties include stopping the unlawful movement of people and drugs across U.S. borders.

CBP has not been able to hire and retain its required number of Border Patrol agents or meet its goals for other law enforcement jobs.

This testimony addresses its recruitment, hiring, and retention efforts, including our earlier recommendation to gather better data on why agents left.

Increased recruitment. Agent applications more than tripled from 2013 to 2017

Hired a contractor to improve hiring 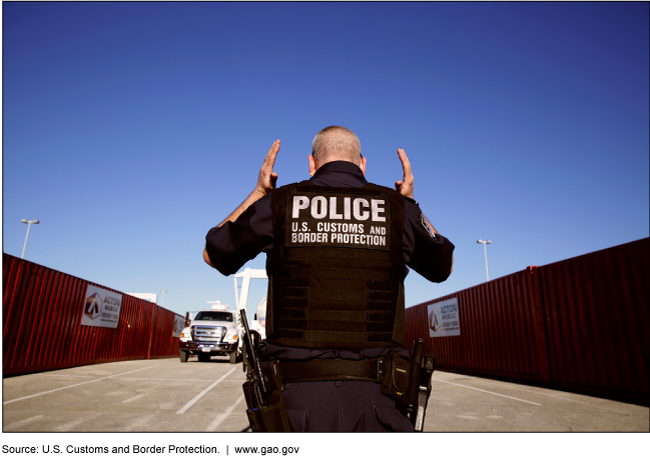 In June 2018, GAO reported that U.S. Customs and Border Protection (CBP) increased its emphasis on recruitment by establishing a central recruitment office in 2016 and increasing its participation in recruitment events, among other things. As a result, the number of applications it received for law enforcement positions across its operational components—the Office of Field Operations, U.S. Border Patrol, and Air and Marine Operations—more than tripled from fiscal years (FY) 2013 through 2017. Also, in November 2017, CBP hired a contractor to more effectively target potential applicants and better utilize data to enhance CBP's recruitment and hiring efforts. However, at the time of GAO's June 2018 report, it was too early to gauge whether the contractor would be effective in helping CBP to achieve its goal to recruit and hire more law enforcement officers.

CBP improved its hiring process as demonstrated by two key metrics—reducing its time-to-hire and increasing the percentage of applicants that are hired. As shown in the table, CBP's time-to-hire decreased from FY 2015 through 2017. CBP officials stated that these improvements, paired with increases in applications, have resulted in more hires. However, the hiring process remains lengthy. For example, in FY 2017, CBP officer applications took more than 300 days, on average, to process. Certain factors contributed to the lengthy time-to-hire, including process steps that can be challenging and time-consuming for applicants to complete—such as the polygraph exam—as well as CBP's reliance on applicants to promptly complete certain aspects of the process—such as submitting their background investigation form.

CBP enhanced its efforts to address retention challenges. However, staffing levels for law enforcement positions consistently remained below target levels. For example, CBP ended FY 2017 more than 1,100 CBP officers below its target staffing level. CBP officials cited employees' inability to relocate to more desirable locations as the primary retention challenge. CBP offered some relocation opportunities to law enforcement personnel and has pursued the use of financial incentives and other payments to supplement salaries, especially for those staffed to remote or hard-to-fill locations. However, retaining law enforcement officers in hard-to-fill locations continues to be challenging for CBP. GAO reported that CBP could be better positioned to understand its retention challenges and take appropriate action to address them by implementing a formal process for capturing information on all departing employees. In response, CBP officials reported taking steps to implement a CBP-wide exit survey and plan to analyze the results of the survey quarterly, beginning April 2019.

CBP is responsible for securing U.S. borders and employs nearly 45,000 law enforcement officers across its three operational components at and between U.S. ports of entry, in the air and maritime environment, and at certain overseas locations. In recent years, CBP has not attained target staffing levels for its law enforcement positions, citing high attrition rates in some locations, a protracted hiring process, and competition from other law enforcement agencies.

This statement addresses CBP's efforts to (1) recruit and more efficiently hire law enforcement applicants, and (2) retain law enforcement officers. This statement is based on a GAO report issued in June 2018 on CBP's recruiting, hiring, and retention efforts along with updates as of February 2019 on actions CBP has taken to address GAO's prior recommendation. For the previous report, GAO analyzed CBP data on recruitment efforts, hiring process steps, and retention rates; examined strategies related to these activities; and interviewed CBP officials and union groups. GAO also reviewed information on CBP actions to implement GAO's prior recommendation.

GAO recommended in its June 2018 report that CBP systematically collect and analyze data on departing law enforcement officers and use this information to inform retention efforts. DHS concurred, and CBP has actions planned or underway to address this recommendation.