Young people who leave foster care at age 18 are often ill-prepared to live on their own. To assist them, states can use federal funds to extend foster care to age 21. States can also allow these young people to practice living independently, such as in a private apartment with monthly check-ins with a case worker.

The 26 states approved to use federal funds to extend foster care reported allowing a range of independent living options, such as shared apartments or college dorms. We also found that selected states help prepare young people to live independently by offering training in areas like financial literacy and daily living skills. 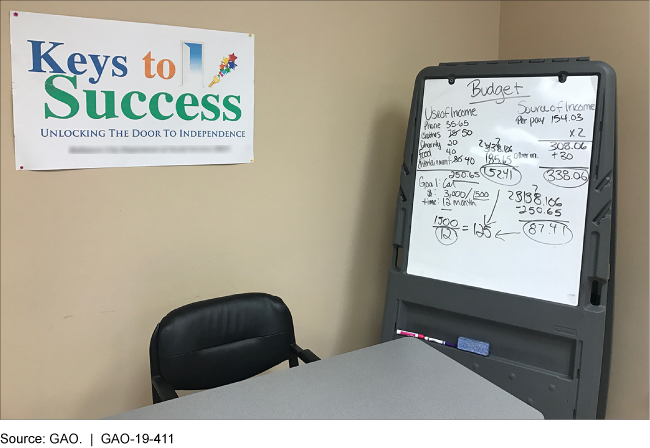 White board with lesson on budgeting.

The 26 states that have approval to receive federal funding to support their extended foster care programs for youth ages 18 up to 21 reported providing a range of supervised independent living arrangements. These arrangements include transitional living programs, private residences, and other settings (see figure). Officials we spoke with in five selected states said transitional living programs typically involve private child welfare agencies that lease apartments or facilities for youth, either at a single site or scattered across a geographic area, and offer on-site case management and supports to help youth build independent living skills. For private residences, youth may choose where to live, such as a private or shared apartment. In these cases, youth are typically responsible for their own lease, and may receive minimal supervision compared to youth in transitional living programs. For other settings, states reported options such as college dorms and residential employment training programs. Nineteen states also reported allowing youth under 18 to live in supervised independent living settings in certain instances, such as when they are pregnant, parents, or attending college, although such placements are generally not eligible for federal funding.

Factors that most states reported considering when placing youth in supervised independent living arrangements include the youth's life skills—for example, their ability to budget finances and schedule medical appointments—as well as their education and employment status. Officials in selected states also said they consider the availability of housing, which may be limited in certain localities due to a lack of affordable housing options or other factors, and the options available to youth with complex needs, such as those who are pregnant and parents.

Officials in four selected states said they help prepare youth in extended foster care to live independently by providing targeted trainings and other supports, such as financial literacy training. In all five selected states, youth can also learn independent living skills through services offered more broadly to all older youth in foster care, officials said, including assistance with housing, education, employment, and daily living skills, such as grocery shopping and budgeting.

Youth who leave the foster care system at age 18 are often ill-prepared to live on their own and may face challenges as they transition to adulthood, such as difficulties finding stable housing. The Fostering Connections to Success and Increasing Adoptions Act of 2008 allowed states to receive federal reimbursement through title IV-E of the Social Security Act for a portion of the cost of extending care to certain eligible youth up to age 21. The Act also allows youth ages 18 up to 21 to live in a supervised setting in which the individual is living independently. One such setting may be an apartment, with monthly check-ins with a case worker (referred to as supervised independent living arrangements).