Trauma is a widespread, harmful, and costly public health problem, and is especially detrimental to children. Any frightening, dangerous, or violent event that threatens a child or their loved ones may be traumatic. While not every child suffers lasting effects, trauma significantly increases the risk of mental health and other problems.

Among other things, we interviewed and surveyed officials in 6 states on the challenges agencies face in helping these children. Officials stressed the importance of engaged leadership, citing efforts that struggled without it. They also reported other challenges, including shortages of trained personnel. 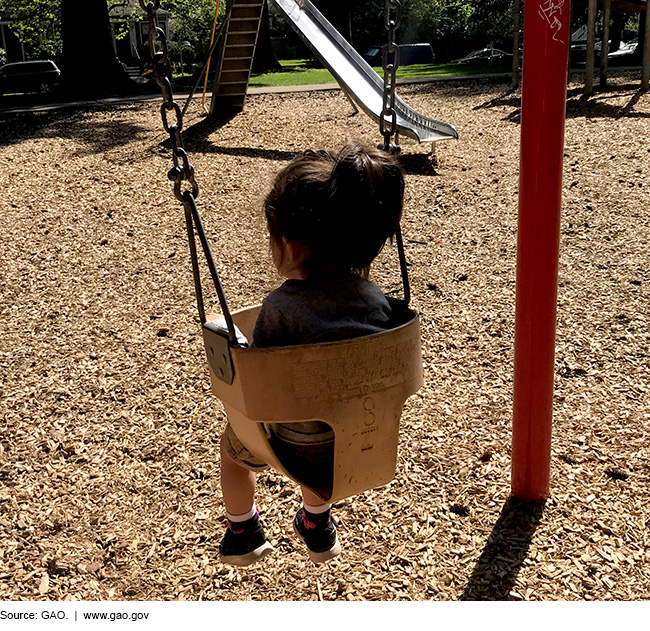 A child on a swing

The Department of Health and Human Services (HHS) and the Department of Education (Education) provide grants, disseminate information, and fund training and technical assistance to help state and local agencies support children affected by trauma. HHS's Administration for Children and Families and Substance Abuse and Mental Health Services Administration (SAMHSA) have awarded discretionary grants specifically to address childhood trauma. In addition, state and local officials reported making use of other discretionary grants from HHS and Education—as well as formula funds meant for broad purposes like mental health, substance abuse, child welfare, and education—to support their work with children affected by trauma. In terms of non-financial support, state and local officials in six selected states all referred to the National Child Traumatic Stress Network, which is funded by SAMHSA, as an important resource for information, training, and technical assistance. Both HHS and Education have also made other guidance and informational resources available to states.

Officials in child welfare and education agencies in the six selected states reported using a range of approaches to help children affected by trauma, including training staff, screening children, and providing services and support systems. To train child welfare workers, educators, and birth and foster parents to understand trauma and its effects on children, agencies in the six selected states used various approaches, such as learning communities, which include in-person learning and coaching, and online courses. Several state child welfare agencies also used learning communities to train clinicians in trauma-focused therapies. In addition, child welfare and education agencies in five states used screening tools to identify children exposed to and exhibiting symptoms of trauma. Children identified as experiencing trauma are referred for a trauma-informed mental health assessment. Also, to help children affected by trauma, child welfare and education agencies in five of the six states provide support and services. For example, in one state, caseworkers provide specialized services, including weekly visits, to children and families.

Officials in the six selected states reported facing various challenges in their efforts to support children affected by trauma, and they emphasized the importance of engaged leadership in establishing and sustaining support for these children. In three states, officials said that a lack of such leadership hindered their efforts, and they described cases that included delayed, incomplete, or unsuccessful implementation of initiatives. Officials in all six states also talked about limitations on their agency's capacity to support children affected by trauma, including:

Officials in some states reported strategies they have used to help address these challenges, including providing additional support to employees and coordinating with partner agencies to jointly leverage resources, expertise, and data.

Trauma is a widespread, harmful, and costly public health problem, and its effects are especially detrimental to children. Any frightening, dangerous, or violent event that threatens a child or their loved ones can potentially be traumatic. While not every child who experiences trauma will suffer lasting effects, trauma significantly increases the risk of mental health problems, difficulties with social relationships and behavior, physical illness, and poor school performance. GAO was asked to review selected states' efforts to support children affected by trauma.

GAO interviewed state and local officials in six states that were selected based on recommendations from subject-matter experts and federal officials, among other factors; administered a questionnaire to 16 state agencies in the selected states; interviewed federal officials from HHS and Education; and reviewed relevant federal, state, and local agency documents, such as reports and guidance. Although our findings cannot be generalized to all states, they provide insight into government support for children affected by trauma.