HUD seeks to help millions of Americans find quality, affordable housing through its rental assistance and other programs.

Recipients of HUD funding, such as private owners of HUD-assisted housing, must meet regulations and may face inspections. If housing does not pass inspection, HUD employees may refer the case to its Departmental Enforcement Center for enforcement.

Our review found ways the Center, which has recovered millions of dollars in inappropriately used funds, can better achieve its mission. Our recommendations include

developing guidance for HUD staff on when to make referrals 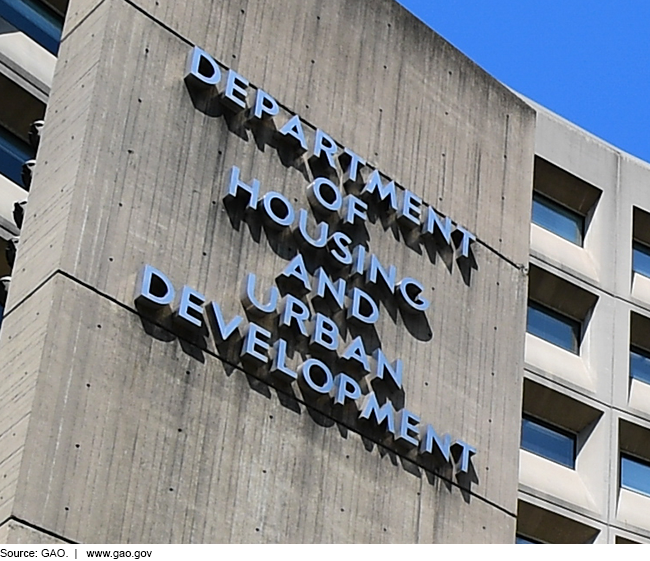 This is a photo of the Department of Housing and Urban Development.

The three program offices of the Department of Housing and Urban Development (HUD) that GAO examined have a process in place for referring cases of potential noncompliance to the Departmental Enforcement Center (DEC), but two of the offices do not provide their staff with specific guidance on when to make referrals. The Office of Multifamily Housing makes referrals to DEC based on defined thresholds for noncompliance, such as for properties that do not pass physical inspections. In contrast, the Offices of Public and Indian Housing (PIH) and Community Planning and Development (CPD) have broad guidelines but not specific thresholds for when to refer an entity to DEC. These two offices do not provide field staff with specific guidance to help determine which housing agencies or grantees to refer to DEC for possible enforcement action. As a result, the offices cannot ensure that decisions on whether to make referrals are made on a well-supported and consistent basis, potentially limiting DEC's effectiveness in fulfilling its mission of providing independent oversight of HUD's programs. In addition, PIH and CPD have targets for how many annual referrals the program office will make to DEC, but the targets are not based on program risk. According to federal internal control standards, management should identify, analyze, and respond to risks related to achieving the defined objectives. Without a target number of referrals based on program risk, PIH and CPD cannot be confident that the number of cases referred to DEC is appropriate and that DEC resources are being used efficiently.

DEC tracks some performance measures, but it largely measures outputs, such as number of work assignments completed, rather than outcomes, such as financial performance improvements resulting from its work, that would help assess the impact of its activities. DEC also does not track the status of recommendations it makes to program offices or measure indicators of its timeliness in completing its reviews for the referrals it receives. In addition, GAO found that DEC staff did not consistently record two key data elements (including the corrective action taken) in the spreadsheet used to track referrals. Improving DEC's performance measurement system and data recording would be consistent with federal internal control standards and allow DEC to better assess its effectiveness, ensure accountability, and identify potential improvements.

DEC has experienced various information technology challenges that have affected its ability to carry out its mission. For example, DEC's current system is not designed to allow staff to easily determine the basis for certain referrals or identify and analyze trends in referrals over multiple years. In addition, DEC has experienced continuing outages and breaks in service. HUD has developed plans for a replacement system, but funding constraints have delayed the implementation of the new system. DEC staff also noted that the organizational location of DEC within the Office of General Counsel was a challenge to carrying out its mission because it limited DEC's ability to hold program offices accountable for corrections. HUD disagreed and also stated that the department has no plans to relocate DEC. Based on GAO's review, other factors, such as the lack of guidance for making referrals (discussed above), may better explain why DEC may not be utilized more effectively.

HUD established DEC in 1998 to consolidate enforcement functions. In fiscal year 2017, DEC received about 2,800 referrals from program offices for oversight of and enforcement actions against property owners, public housing agencies, and state and local grantees that do not comply with requirements.

The Joint Explanatory Statement accompanying the Consolidated Appropriations Act, 2017, included a provision for GAO to assess DEC's effectiveness addressing noncompliance. GAO examined (1) the processes selected program offices have in place to make referrals, (2) how DEC assesses its performance, and (3) challenges that may affect the ability of DEC to achieve its mission. GAO reviewed agreements and referral data between DEC and three of the nine HUD program offices that made referrals to DEC from fiscal years 2014 to 2017 (accounting for 73 percent of the total referrals during that period), and interviewed HUD staff in headquarters and field offices.

GAO is making eight recommendations to HUD related to DEC, including for staff guidance on when to make referrals; targets for the number of DEC referrals based on program risk; outcome measures to track performance; and controls to ensure consistent data recording. HUD agreed with five of the eight recommendations, noting that setting referral targets was inconsistent with basing them on program risk. GAO maintains that setting referral targets can help ensure that program offices make referrals to DEC.

How Some Property Owners are “Gaming” the HUD Inspection Process