Researchers estimate that as many as 1 in 10 older U.S. adults are abused each year. This includes physical, sexual, or emotional abuse, financial scams, and neglect. It can occur at the hands of family, guardians, caregivers, or others.

The Department of Justice has investigated and prosecuted cases of elder abuse, provided training and grants, and taken other actions to combat it. However, DOJ has not developed goals that could help guide these efforts.

Examples of Scams Commonly Committed Against Older Adults in the U.S. 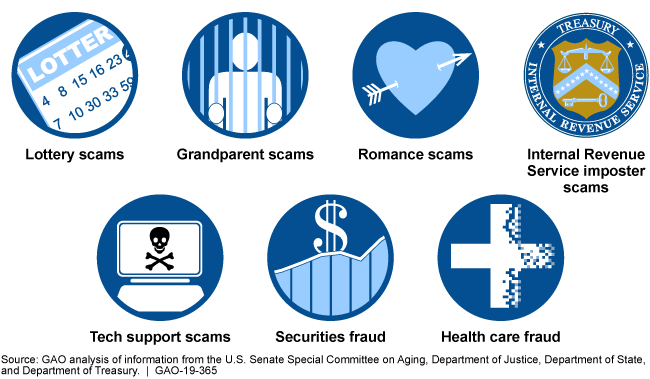 A graphic showing different types of scams and fraud

The Department of Justice (DOJ) has established several efforts to address elder abuse, including neglect and exploitation, but its planning and assessment of its elder justice efforts are limited. For example, DOJ has established several working groups and in accordance with the Elder Abuse Prevention and Prosecution Act (EAPPA)—enacted in October 2017—designated an elder justice coordinator in each of its 94 U.S. Attorneys' Offices. In addition, DOJ provides training and educational materials on elder justice topics for its own staff, as well as state and local officials, and also offers grants to state and local entities that can be used to address elder abuse.

Despite these efforts, DOJ has not developed and documented goals (e.g., enhancing coordination with state and local officials) that articulate the common outcomes it seeks to achieve through its elder justice work. DOJ also has not developed outcome measures that track the agency's progress on its overall elder justice efforts, for example, a means to measure if its coordination practices have been useful and relevant over time to state and local officials. DOJ officials stated that they do have goals, and noted that one of them is to comply with EAPPA. However, implementing the requirements outlined in EAPPA is not a goal that articulates a common outcome that the agency is seeking to achieve through its efforts. Developing and documenting goals and outcome measures, which is consistent with both leading practices and internal control standards, would assist with DOJ's planning—providing direction for what it seeks to achieve—and its assessment of overall effectiveness.

Researchers estimate that as many as 1 in 10 older adults in the United States—age 60 or older—experience abuse each year. Elder abuse may involve physical, sexual, emotional, or financial abuse or neglect. It can occur by family, guardians, or caregivers as well as by strangers and international criminal enterprises, which operate schemes for monetary gain or to facilitate other criminal activities. According to media reports and congressional testimony, some older U.S. citizens who have traveled abroad have unwittingly participated in illicit activities, and in some cases, have been arrested in foreign countries.

EAPPA included a provision for GAO to review elder justice efforts in the federal criminal justice system. This report examines (1) the ways DOJ works to address crimes against older adults, and to what extent DOJ is planning for and assessing its efforts; and (2) how the Departments of State and Homeland Security address the arrest of older U.S. citizens abroad, including arrests involving international criminal enterprises. GAO reviewed agency policy documents, and interviewed agency officials, as well as a nongeneralizable sample of elder abuse stakeholders and state and local officials selected for their experience in this area.

GAO made two recommendations related to developing and documenting goals and outcome measures for DOJ's elder justice work. In its response, the agency outlined steps to address the recommendations.