The Zika virus appeared in the Western Hemisphere in May 2015 and spread to many countries in less than a year. Zika can have mild or unnoticed symptoms, but it can also cause severe birth defects.

In response, USAID supported a range of activities overseas, including mosquito control, public awareness, and research. However, USAID didn't track Zika funding by country and took longer than desired to get response efforts launched in some countries.

To better position the agency for future outbreaks, we recommended that USAID track funding by country and take steps to improve its infectious disease response planning.

Mosquito That Carries the Zika Virus Viewed under a Microscope 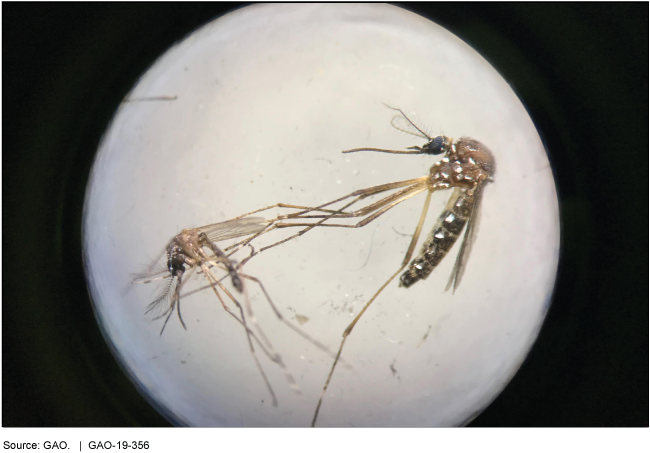 Mosquito That Carries the Zika Virus Viewed under a Microscope

The U.S. Agency for International Development (USAID) and the Department of State (State) obligated $385 million of the total $390 million available for international Zika response and disbursed $264 million as of September 2018. USAID obligated 95 percent of the total funding. USAID and State provided some country information to Congress but did not provide, or take steps to track, funding on a country basis. According to USAID officials, tracking funding information by country would be helpful in the future. The ability to compile funding by country when responding to future infectious disease outbreaks would enable USAID to provide additional information to key decision makers to better support spending oversight and inform budgetary and planning decisions.

USAID-Supported Worker Collects Insects for Monitoring Purposes in a Home in Honduras (left), and Mosquito That Carries the Zika Virus Viewed under a Microscope (right)

USAID faced sustainability and timeliness challenges in implementing its Zika response. According to agency and other officials, one-time funding and a short time frame posed a challenge related to sustainability of Zika response activities. In response, USAID worked to align activities with those of host governments and other organizations so they could continue in the long term. However, USAID's emergency response planning did not fully address the challenge of timely implementation of response activities in countries without bilateral USAID health programs. Twenty-two of 26 countries with Zika response activities did not have bilateral USAID health programs when the Zika outbreak began. As a result, response activities took additional time to deploy in some countries where USAID first had to establish relationships with key host country officials. Although USAID developed an infectious disease response plan in 2018, the plan does not provide guidance on how to address the timely implementation challenge in countries without bilateral health programs. By improving its planning, such as by adding such guidance in its 2018 plan, USAID would be better positioned to respond quickly to future disease outbreaks.

The World Health Organization (WHO) declared the Zika virus a public health emergency of international concern in February 2016. According to WHO, as of March 2017, 79 countries and territories—including 48 in the Western Hemisphere—reported evidence of ongoing Zika transmission. In April 2016, USAID and State repurposed $215 million for Zika from funds appropriated for Ebola. Subsequently, the Zika Response and Preparedness Appropriations Act, 2016, provided over $175 million in supplemental funding to USAID and State to support Zika response efforts overseas. The act also included a provision for GAO to review the status of USAID and State actions to respond to Zika. In March 2019, the Centers for Disease Control and Prevention downgraded its international travel warning for Zika.

This report examines (1) the status of USAID and State funding for U.S. Zika response overseas, (2) activities supported by these funds, and (3) implementation challenges, if any, and responses to any challenges. GAO reviewed information from U.S. agencies and met with U.S. and host country officials in Washington, D.C. GAO also conducted fieldwork in a nongeneralizable sample of countries in Latin America and the Caribbean where agencies implemented key response activities.