These agencies used LWCF funds to acquire over 850,000 acres from FYs 2013-2017 for things like protecting wildlife habitat or improving recreational access.

We found that, unlike the other agencies, Bureau of Land Management does not maintain centralized data on how it acquires this land. It also could not identify all lands it acquired with LWCF funds. We recommended that the bureau improve its data collection efforts. 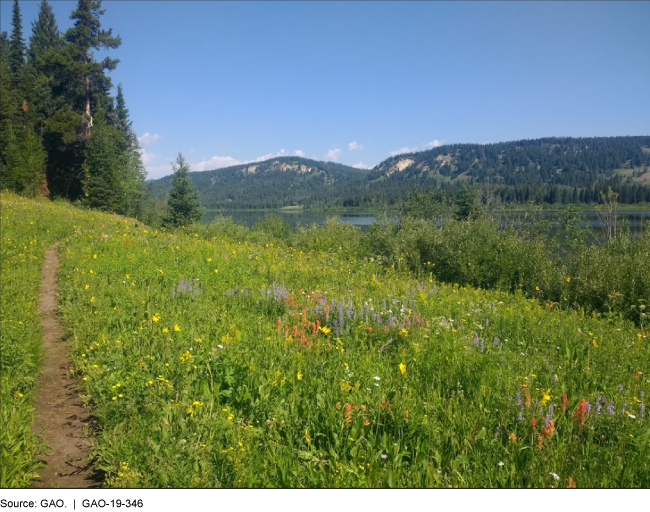 From fiscal years 2014 through 2018, Congress appropriated nearly $1.9 billion from the Land and Water Conservation Fund (LWCF). About half supported federal land acquisition across four agencies—Bureau of Land Management (BLM), Fish and Wildlife Service (FWS), National Park Service (Park Service) in the Department of the Interior, and the Forest Service in the Department of Agriculture—and half supported five other programs. These five programs provided states or local governments with funds for a variety of conservation and recreation purposes, such as conserving private forests or battlefields.

BLM, FWS, the Park Service, and the Forest Service use similar processes to select federal land acquisition projects involving local land units (such as national parks), regional offices, and headquarters. In general, land units identify projects and send them to regional offices for review before headquarters' offices assess the projects. Conservation organizations can also play a role in assisting federal agencies to acquire lands by identifying willing sellers, among other things.

In fiscal years 2013 through 2017, the four land agencies used LWCF appropriations to acquire over 850,000 acres. Most of these lands were acquired within the boundaries of their land units, according to agency officials. The agencies acquired land for various reasons, such as to protect wildlife habitat or improve recreational access. All four agencies acquired a little more than half of the land on a fee simple basis, which means all rights to the land were obtained; for the remaining land, the agencies acquired less than full ownership of all of the land rights. In addition, these agencies primarily acquired land by purchasing land from a landowner or receiving land donated by a landowner.

In contrast, FWS, the Park Service, and the Forest Service maintain centralized data on acquisition method and interests acquired, which officials from these agencies said were key data elements for maintaining an inventory of the lands they manage and to respond to information requests from Congress. Federal internal control standards call for agencies to obtain relevant data from reliable internal sources. Maintaining centralized data on land acquisition methods and interests acquired would help BLM maintain a more complete inventory of its lands, respond more quickly to information requests from Congress, and provide additional information to manage its lands. In addition, without more specific guidance to ensure that relevant data on LWCF land acquisitions are entered in its data system, BLM will not be able to use its system to identify all of the lands acquired using LWCF funds to track program outcomes and inform management decisions.

The LWCF is a U.S. Treasury fund that is used for land conservation and recreational purposes, through land acquisition and other means. The LWCF is authorized to accrue a minimum of $900 million annually, primarily from oil and gas leasing fees. Congress appropriates money from the fund for various programs. Four federal land management agencies—BLM, FWS, the Park Service, and the Forest Service—are responsible for implementing these programs.

GAO was asked to review the LWCF. This report examines (1) LWCF appropriations for fiscal years 2014 through 2018 and the programs supported by these funds; (2) the process for selecting federal land acquisition projects to fund using the LWCF; and (3) the federal lands that were acquired using LWCF funds for fiscal years 2013 through 2017, reasons for acquiring lands, and acquisition methods. GAO reviewed agency guidance; analyzed agency data, including appropriations data, for the most recent data available; and interviewed agency officials at the headquarters, regional, and land unit levels based on geographic diversity and other factors, along with officials at conservation groups identified by federal agencies.

GAO recommends that BLM collect centralized data on the acquisition method and interest acquired for the lands it obtains using the LWCF and that the agency develop more specific guidance to ensure that land acquisition data are entered properly in its data system. Interior concurred with these recommendations.

A Look at How the Government Acquires Public Lands