The Department of Labor’s Job Corps program helps low-income youth obtain various skills, including those needed to find a job. Its centers are operated mostly by contractors. 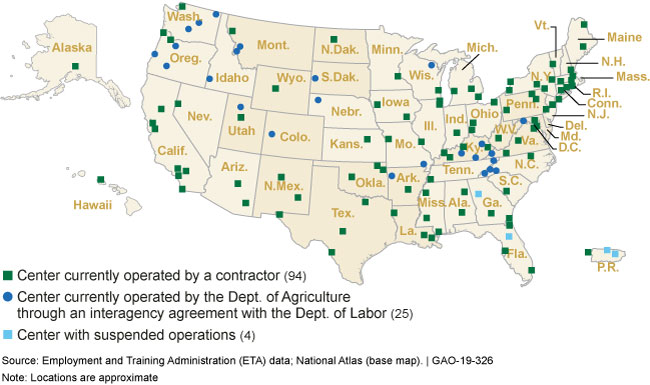 In program year 2016, the Department of Labor's (DOL) Employment and Training Administration (ETA) operated 68 of its 97 Job Corps centers using bridge contracts. GAO has generally defined a bridge contract as an extension to an existing contract or a new noncompetitive contract awarded to the current contractor to avoid a lapse in service. GAO found that ETA operated most of these Job Corps centers (49 of 68) under bridge contracts for at least a year, with over a third operating under bridges for 2 years or potentially longer. ETA cited workforce challenges such as staff vacancies and the need to address issues raised in protests as contributing to its use of bridge contracts.

ETA officials said they used various strategies to decrease their use of noncompetitive bridge contracts, including prioritizing efforts to award more contracts competitively. By the end of program year 2017, most of the centers operating under bridge contracts during program year 2016 (48 of 68) had transitioned to competitive contracts. Despite these efforts, ETA continues to face workforce challenges. Contracting officials expressed concern about having sufficient staff to award a large group of contracts that will begin to expire in program years 2021 and 2022 (see figure). ETA officials said it takes about 8 to 12 months from solicitation to contract award for new 5-year competitive procurements. Therefore, acquisition planning for a center contract set to expire in January 2021 would usually need to begin early 2020. However, ETA does not have a comprehensive workforce strategy to address its workforce challenges or support these new contract awards. As a result, ETA risks relying on noncompetitive bridge contracts again in the future.

Note: Centers are operated on a program year basis, which runs from July 1 of a given year to June 30 of the following year.

ETA used various strategies to monitor and incentivize contractor performance at the 10 centers GAO reviewed, including conducting onsite visits to Job Corps centers and paying incentive fees to contractors. However, contracting and program officials GAO interviewed had limited or no insight into how ETA calculates and pays incentive fees. Without coordinating and documenting the process for calculating incentive fees, ETA's program and contract officials may lack key information regarding contractor performance.

Job Corps' 119 centers, which are operated primarily by contractors, provide an array of services to help low-income youth find a job, go to college, or enter the military. ETA is generally required to award competitive contracts, but can award noncompetitive contracts in certain instances. Some noncompetitive contracts act as bridge contracts—which can be a useful tool to avoid a lapse in service but, when used frequently and for prolonged periods, can increase the risk of the government overpaying for services.

This report examines (1) the extent to which ETA used bridge contracts to operate Job Corps centers in program year 2016; (2) strategies ETA used to decrease the use of noncompetitive bridge contracts; and (3) how ETA monitored contractor performance at selected Job Corps centers. GAO analyzed data from program years 2016 and 2017(the most current data available at the time we began our review) from the Federal Procurement Data System-Next Generation, and reviewed contract documents. GAO also conducted an in-depth review of 10 centers that reflected a mix of contractor performances and at least one center from Job Corps' six regions, and interviewed ETA officials.

GAO is making two recommendations, including that ETA develop (1) a comprehensive strategy to account for workforce needs and future center contracts, and (2) a coordinated and documented process for sharing information on incentive fees paid to contractors. DOL agreed with GAO's recommendations.