An air ambulance can quickly transport you to a hospital in an emergency. But how much could it cost you?

The data we reviewed indicated that in 2017, about 2/3 of air ambulance transports for patients with private insurance were out-of-network. Generally, insurance only pays for a portion of an out-of-network service.

In that case, you could be billed for the difference between what the air ambulance provider charges and what your insurance paid—which is known as "balance billing" or "surprise medical billing."

Almost all of the consumer complaints we reviewed involved balance bills of over $10,000. 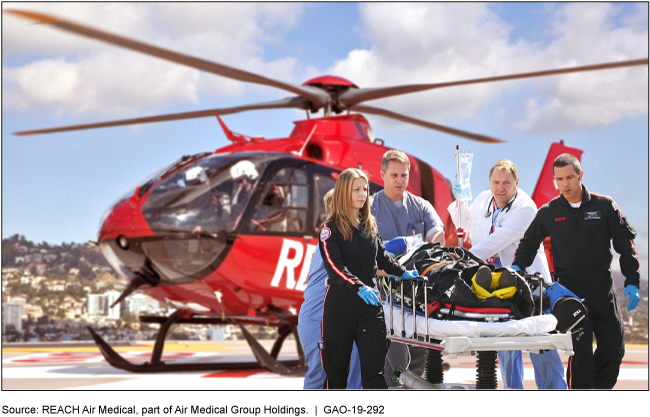 Privately-insured patients transported by air ambulance providers outside of their insurers' provider networks are at financial risk for balance bills—which, as the figure shows, are for the difference between prices charged by providers and payments by insurers. Any balance bills are in addition to copayments or other types of cost-sharing typically paid by patients under their insurance coverage.

According to GAO's analysis of the most complete data identified for air ambulance transports of privately-insured patients, 69 percent of about 20,700 transports in the data set were out-of-network in 2017. This is higher than what research shows for ground ambulance transports (51 percent in 2014 according to one study) and other emergency services. Air ambulance providers that GAO spoke with reported entering into more network contracts recently, which could lower the extent of out-of-network transports in areas covered by the contracts.

While out-of-network transports may result in balance billing, the data GAO analyzed do not indicate the extent to which patients received balance bills and, if so, the size of the bills. In addition, as GAO reported in 2017, there is a lack of national data on balance billing, but some states have attempted to collect information from patients. For example, GAO reviewed over 60 consumer complaints received by two of GAO's selected states—the only states able to provide information on the amount of individual balance bills—and all but one complaint was for a balance bill over $10,000. Patients may not end up paying the full amount if they reach agreements with air ambulance providers, insurers, or both. The amounts of potential balance bills are informed in part by the prices charged. GAO's analysis of the data set with transports for privately-insured patients found the median price charged by air ambulance providers was about $36,400 for a helicopter transport and $40,600 for a fixed-wing transport in 2017.

The six states reviewed by GAO and others have attempted to limit balance billing. For example, the six states have taken actions to regulate insurers, generate public attention, or both. As required by recent federal law, the Secretary of Transportation has taken steps to form an advisory committee to, among other things, recommend options to prevent instances of balance billing.

Air ambulances provide emergency services for critically ill patients. Relatively few patients receive such transports, but those who do typically have no control over the selection of the provider, which means privately-insured patients may be transported by out-of-network providers.

The Joint Explanatory Statement accompanying the 2017 Consolidated Appropriations Act includes a provision for GAO to review air ambulance services. Among other objectives, this report describes (1) the extent of out-of-network transports and balance billing and (2) the approaches selected states have taken to limit potential balance billing.

GAO analyzed a private health insurance data set for air ambulance transports with information on network status and prices charged in 2017 (the most recent data available). Although this was the most complete data identified, the data may not be representative of all private insurers. In addition, GAO interviewed officials in six states (Florida, Maryland, Montana, New Mexico, North Dakota, and Texas) selected in part for variation in approaches to limit balance billing and location. GAO also interviewed air ambulance providers, health insurers, and Centers for Medicare & Medicaid Services and Department of Transportation (DOT) officials. DOT provided technical comments on a draft of this report, which GAO incorporated as appropriate, and the Department of Health and Human Services had no comments.

The High Cost of a Medical Flight