The Department of Energy is tasked with cleaning up waste from Cold War nuclear weapons production, much of which is hazardous or radioactive. The department's Office of Environmental Management estimates that future work could cost at least $377 billion—$109 billion more than last year's estimate.

Each of the 16 cleanup sites sets its own priorities, which makes it hard to ensure that the greatest health and environmental risks are addressed first.

Environmental liabilities are High Risk because they have been growing for the past 20 years and will likely keep increasing. 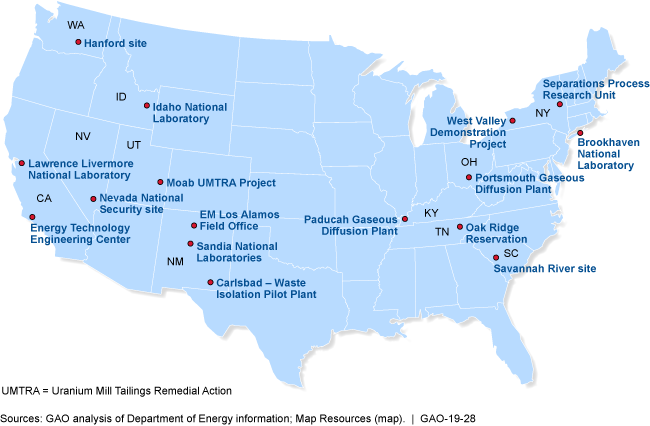 This map shows 16 locations across the United States where cleanup activities are ongoing.

The Department of Energy's (DOE) Office of Environmental Management (EM) faces an environmental liability of $377 billion, according to DOE's fiscal year 2018 financial statement. This amount largely reflects estimates of future costs to clean up legacy radioactive tank waste and contaminated facilities and soil. From fiscal years 2011 through 2018, EM's environmental liability grew by about $214 billion—outpacing its cleanup spending of about $45 billion for that time period. Contract and project management problems and other factors have led to this growth. For example, EM's environmental liability increased by nearly $130 billion from fiscal year 2014 to 2018 at the Hanford Site in Washington State, in part because of contract and project management problems with waste cleanup. GAO found that EM's liability will likely continue to grow, in part because the costs of some future work are not yet included in the estimated liability. For example, EM's liability does not include more than $2.3 billion in costs associated with 45 contaminated facilities that will likely be transferred to EM from other DOE programs in the future.

EM relies primarily on individual sites to locally negotiate cleanup activities and establish priorities. GAO's analysis of DOE documents identified instances of decisions involving billions of dollars where such an approach did not always balance overall risks and costs. For example, two EM sites had plans to treat similar radioactive tank waste differently, and the costs at one site—Hanford—may be tens of billions more than those at the other site. EM sites generally do not consider other sites' risks and priorities when making cleanup decisions. This is not consistent with recommendations by GAO and others over the last 2 decades that EM develop national priorities to balance risks and costs across and within its sites. However, EM has not developed such a program-wide strategy. Instead, according to agency officials, it continues to prioritize and fund cleanup activities by individual site. Without a strategy that sets national priorities and describes how DOE will address its greatest risks, EM lacks assurance that it is making the most cost-effective cleanup decisions across its sites.

EM's recent budget materials have not provided required or accurate information on funding needed to meet future cleanup responsibilities. For example, under the National Defense Authorization Act for Fiscal Year 2011, EM must annually report estimated costs and detailed funding needs for future cleanup activities. EM's 2017 submission to Congress—only the second one since 2011—did not include a detailed list of upcoming activities or funding needed to meet those activities. Additionally, EM's recent budget materials have not reflected the funding needed to meet schedule milestones called for in site-specific compliance agreements with states. These agreements are legally enforceable documents defining cleanup activities that DOE must achieve by specified dates. By reflecting the funding it needs to meet all of its scheduled milestones called for in compliance agreements—for example, in its annual report noted above or in supplemental budget materials—EM could better ensure that Congress has complete information to assess the full costs of long-term cleanup.

DOE is tasked with cleaning up legacy waste from nuclear weapons produced during the Cold War era. Since it began its cleanup program in 1989, EM has spent about $170 billion, but its most challenging and costly cleanup work remains, according to agency documents. EM's cleanup of legacy defense waste is annually funded through discretionary appropriations, so difficult trade-offs will have to be made between cleanup and other nuclear-related defense spending.

In 2017, GAO added federal government environmental liabilities to its High-Risk List. GAO was asked to review EM's environmental liability. This report examines (1) what is known about EM's environmental liability, (2) the extent to which EM balances risks and costs when addressing its cleanup responsibilities, and (3) the extent to which EM's budget materials provide required and accurate information on needed funding. GAO reviewed DOE financial statements, DOE documents, and reports by independent experts; visited three EM sites with three-quarters of the liability; and interviewed EM headquarters and site officials.

GAO is making three recommendations to DOE: (1) develop a program-wide strategy that outlines how it will balance risks and costs across sites; (2) submit its mandated annual cleanup report that meets all requirements; and (3) disclose the funding needed to meet all scheduled milestones called for in compliance agreements, either in required annual reports or other supplemental budget materials. DOE agreed with all three recommendations.