Because the Chinese government funds these institutes, some researchers, U.S. officials, and others have raised concerns about undue influence and suppression of academic freedom.

We reviewed 10 universities and found their institute directors were all U.S. university employees who reported they—not China—had full control. Some held events on controversial topics like Tibet or Taiwan. We also reviewed 90 agreements establishing these institutes and found some universities tailored them to include language on academic freedom.

All but Six U.S. States Have at Least One Confucius Institute on University Campuses 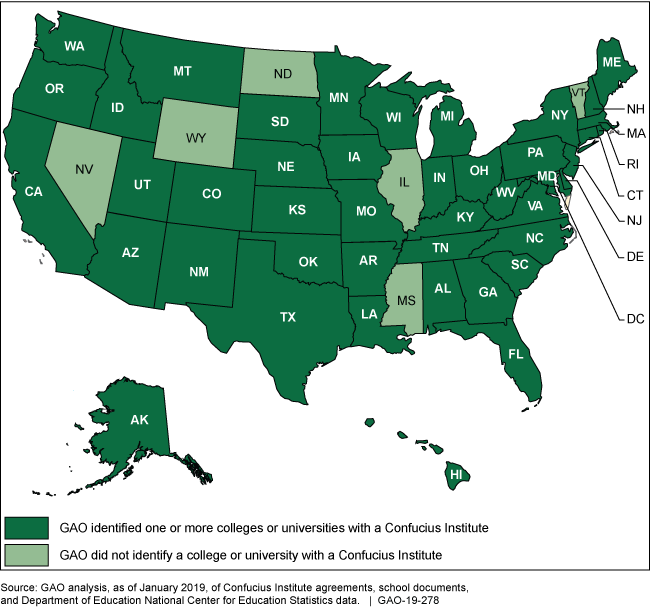 According to the Chinese Language Council International, also referred to as Hanban, Confucius Institutes are intended to promote Chinese language and culture in foreign countries. Agreements between Hanban and U.S. colleges and universities (which GAO refers to as U.S. schools) to establish Confucius Institutes are generally similar to one another, though institute operations vary in practice. GAO reviewed 90 agreements and found they describe generally similar activities, funding, and management. For example, the institutes primarily receive funding from Hanban and the U.S. school, and do not receive direct U.S. federal funding. GAO also examined the agreements for language on application of school polices to the institutes, curriculum, and confidentiality, among other things. One-third of the agreements explicitly addressed how U.S. school policies apply to institutes, and a few addressed curriculum. Officials GAO interviewed at case study schools noted that U.S. school policies, including policies on matters such as curriculum, apply to institutes at their schools, though we found schools vary from one another in institute activities and use of resources, including teachers and teaching materials. While 42 of 90 agreements include language indicating that the document was confidential, some agreements were available online or are shared upon request. Some officials at schools that did not post agreements online said this was consistent with handling of other agreements.

School officials, researchers, and others described benefits and concerns related to Confucius Institutes, and suggested ways to improve the institutes. Officials cited increased resources for Chinese language and cultural programs as among key institute benefits. Some researchers and others have expressed concern that the presence of an institute could constrain campus activities and classroom content. For example, several researchers stated that schools with Confucius Institutes might avoid hosting events on topics that could include criticism of China, such as Taiwan or Tibet, so as to not offend Chinese partners. However, school officials offered examples to illustrate that these various concerns did not apply to their institute. For example, officials at 10 case study schools told GAO that they do not use materials provided by Hanban for credit-bearing courses, and school officials stated that Hanban did not place limitations on events of any type. Nonetheless, school officials, researchers, and others suggested ways schools could improve institute management, such as by renegotiating agreements to clarify U.S. schools' authority and making agreements publicly available.

Confucius Institutes are partnerships between Chinese entities and schools in other countries, arranged and funded in part by Hanban, which is affiliated with the Chinese Ministry of Education. There are more than 500 Confucius Institutes worldwide and 96 located at colleges and universities in the United States as of December 2018. Some researchers, government officials, and others have raised questions about whether the institutes are sources of undue Chinese influence.

GAO was asked to review Confucius Institutes at U.S. colleges and universities. This report describes, among other things, (1) the contents of written agreements between U.S. schools and Hanban and how the institutes operate in practice; and (2) perspectives of school officials, researchers, and others on benefits, concerns, and suggestions relating to the institutes.

GAO analyzed 90 written agreements obtained from U.S. colleges and universities with Confucius Institutes, and interviewed institute personnel and school officials at 10 schools with Confucius Institutes—which were diverse in terms of geography, size, public or private status, and other characteristics. GAO also interviewed officials at the Departments of Defense, Education, and State; researchers; representatives from higher education associations; and officials at schools that closed or declined to open an institute.