Robots, artificial intelligence, and other advanced technologies are changing the workplace. We visited companies to observe the effects on workers. Effects varied, with some companies reducing their workforces, many moving workers to different roles, and some hiring workers due to increased production or new skill needs.

We recommended that the Department of Labor develop ways to better track workforce effects of technologies. 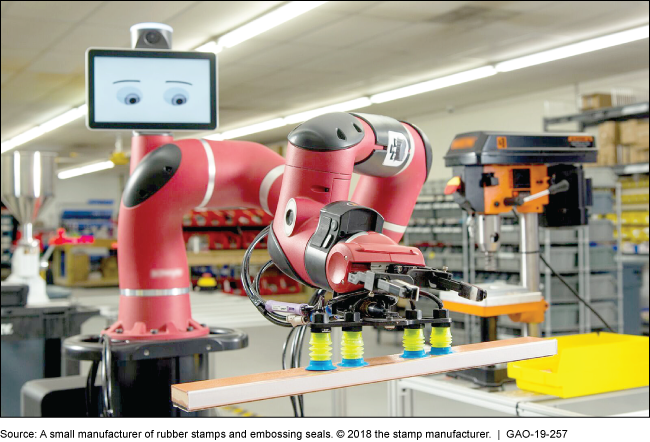 A robot arm lifts a piece of wood with suction cups. Its animated eyes watch from a screen above.

Although existing federal data provide useful information on the U.S. workforce, they do not identify the causes of shifts in employment. As a result, it is difficult to determine whether changes are due to firms adopting advanced technologies, such as artificial intelligence and robots (see photo), or other unrelated factors. In lieu of such data, GAO analyzed employment trends and characteristics of jobs that selected researchers identified as susceptible to automation, and found that:

Example of an Advanced Technology: A Collaborative Robot in the Workplace 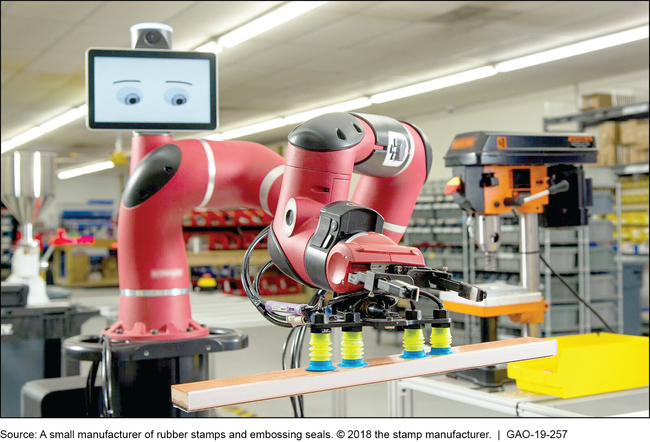 The Department of Labor (DOL) has a role in tracking changes in the U.S. workforce, but the data it collects related to the workforce effects of advanced technologies are limited. DOL's Bureau of Labor Statistics (BLS) identifies occupations projected to experience staffing pattern changes and the most significant causes, such as use of robotics, but its efforts are not designed to capture all instances of changes due to advanced technologies. DOL's Occupational Information Network program also collects data on tasks and technologies in occupations, such as robotics, but it was not designed to track changes over time. According to BLS, these efforts and other data they collect provide some, but not all, of the information required to identify and systematically track the impact of automation on the workforce. Without comprehensive data that link technological changes to shifts in the workforce, DOL lacks a valuable tool for ensuring that programs it funds to support workers are aligned with local labor market realities, and employers and job seekers need to rely on other sources of information to decide what training to offer or seek.

The Department of Commerce's Census Bureau (Census) has started tracking technology adoption and resulting workforce effects in the new Annual Business Survey, which was administered for the first time in June 2018 with significant support from the National Science Foundation. This first survey asked firms about their use of advanced technologies and initial results will be available in late 2019. When the survey is next administered in summer 2019, Census plans to ask additional questions about firms' motivations for adopting technologies and effects the technologies might have on workers. This survey could provide information about the prevalence of technology adoption and workforce changes (e.g., declines in production workers or increases in supervisory workers), but it is not intended to provide information on the magnitude of workforce changes. Also, it remains unclear what limitations, if any, the survey data may have.

According to officials from the 16 firms GAO interviewed, cost savings and other considerations led them to adopt advanced technologies, despite facing certain risks with the new technologies. Officials from these firms typically identified cost savings and improving job or product quality as primary motivations for adopting advanced technologies. For example, an automotive parts manufacturer said the firm adopted robots to reduce costs by using fewer workers. A door manufacturer said the firm installed two robots to lift heavy doors onto a paint line to reduce the number of worker injuries. A rubber stamp manufacturer said acquiring a robot (pictured above) allowed it to purchase and process raw materials instead of buying precut materials. Firm officials also identified risks related to adopting advanced technologies that could affect their return on investment, such as risks related to the reliability of technology and working with new tech developers.

Among the firms GAO met with, officials described various ways technology adoption has affected their workforces. On one hand, officials at many firms said they needed fewer workers in certain positions after adopting technologies. The firms generally redeployed workers to other tasks, and in some cases, reduced the size of their workforces, typically through attrition. For example, a medical center GAO visited adopted autonomous mobile robots to transport linens and waste, among other things, which officials said eliminated 17 positions and shifted workers to other positions. On the other hand, officials at some firms said advanced technologies helped them increase competitiveness and add positions. An appliance manufacturer used advanced technologies to produce more of its own parts instead of relying on suppliers and, as a result, increased the number of production jobs, according to officials. Firm officials also noted that workers' tasks and skills have been changing due to advanced technologies (see figure). Workers who can adapt to new roles may experience positive effects, such as work that is safer, while those who cannot adapt may be negatively affected.

Advanced technologies—including artificial intelligence and robotics—are continually changing and emerging. While robots have existed for decades, modern robots may be equipped with learning capabilities that enable them to perform an expansive array of tasks. Advanced technologies are likely to affect the U.S. workforce by enabling firms to automate certain work tasks. Questions exist about how prepared federal agencies are to monitor workforce changes, promote economic growth, and support workers who may be negatively affected by automation.

GAO recommends that DOL develop ways to use existing or new data collection efforts to identify and systematically track the workforce effects of advanced technologies. DOL agreed with GAO's recommendation, and plans to identify and recommend data collection options to fill gaps in existing information about how the workplace is affected by new technologies, automation, and artificial intelligence. DOL also stated that it will continue coordinating with the Census Bureau on research activities in this area.

It has been a busy year so far in our podcast studio! And if you’re not subscribed to the Watchdog...
Blog Post