Commerce's Manufacturing Extension Partnership (MEP) Program has centers in each state that help small- and medium-sized companies improve their technology and management practices.

Recent legislation set the cost sharing ratio at 1:1, reducing the cost burden for some centers. All centers now match federal funding dollar for dollar. Prior to the change, the cost share increased over time from $1 for $1 to $2 for each $1.

Most centers told us this change improved their financial stability, allowing them to better serve very small and rural companies; however, recent program changes and other factors make it hard to determine the exact impact. 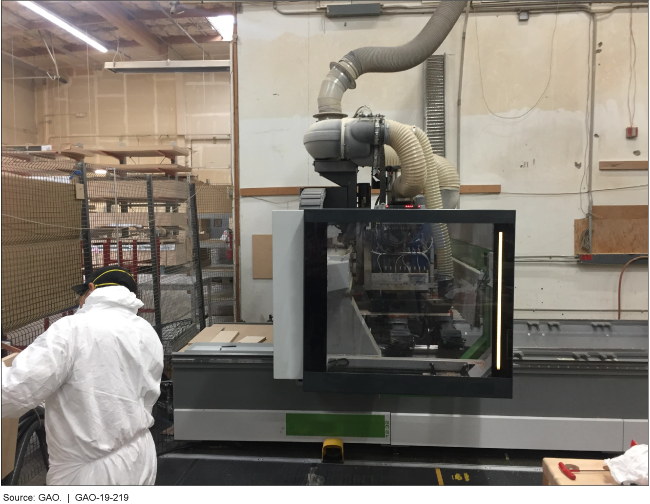 A machine and nearby worker in a cabinet manufacturing facility

Most Manufacturing Extension Partnership (MEP) centers reported that the January 2017 American Innovation and Competitiveness Act (AICA) cost share adjustment has helped them serve manufacturers, especially very small (i.e., less than 20 employees) and rural ones. The AICA adjusted the cost share ratio to remain at 1:1, that is, $1 of nonfederal contributions for each $1 of federal assistance. Before the adjustment, MEP centers' cost share requirement increased over the course of their cooperative agreements from 1:1 to 2:1, requiring centers to obtain a greater proportion of revenue from nonfederal sources. In GAO's survey of all 51 MEP centers, 44 centers cited positive effects of the adjustment on center operations, such as helping to improve center services or better reach underserved manufacturers. Also, 41 centers indicated the adjustment increased their financial stability, which some centers stated has allowed them to focus less on revenue generation and to serve very small and rural manufacturers. However, some MEP center officials observed that the AICA cost share adjustment impact is hard to distinguish from other factors, such as the National Institute of Standards and Technology's (NIST) recompetition of nearly all centers' cooperative agreements between fiscal years 2014 and 2017. The recompetition increased the level of federal financial assistance for most centers and reset many centers' cost share ratio from 2:1 to 1:1 prior to the 2017 adjustment. Still, center officials said that if the cost share requirement reverted to what it was prior to the 2017 adjustment, centers would be less able to serve manufacturers, particularly very small and rural ones.

Small and medium-sized manufacturers are an important part of the U.S. economy. In 1988, to enhance the competitiveness, productivity, and technological performance of U.S. manufacturing, NIST established what is now called the MEP program. The program supports manufacturers through services provided by MEP centers. The centers, located in all 50 states and Puerto Rico, are operated by nonfederal organizations. The MEP centers provide assistance, either directly or through third parties, to help improve manufacturing firms' processes and productivity; expand their capacity; and help them adopt new technologies, utilize best management practices, and accelerate company growth. NIST enters into a cooperative agreement with the nonfederal organization that runs each center to provide federal financial assistance conditional upon the center contributing nonfederal matching funds—known as a cost share.