State and local crime labs analyze DNA evidence from crime scenes to help bring criminals to justice. At the end of 2017, these labs had about 169,000 backlogged requests for DNA analysis.

While labs are doing more work, requests have increased in part because scientific advancements have made DNA analysis more useful.

Also, thousands of sexual assault kits haven't even been submitted to crime labs for DNA analysis. We looked at why these kits stay in storage and recent efforts to get them submitted.

We recommended that the Department of Justice improve its management of a grant program intended to help labs process DNA requests. 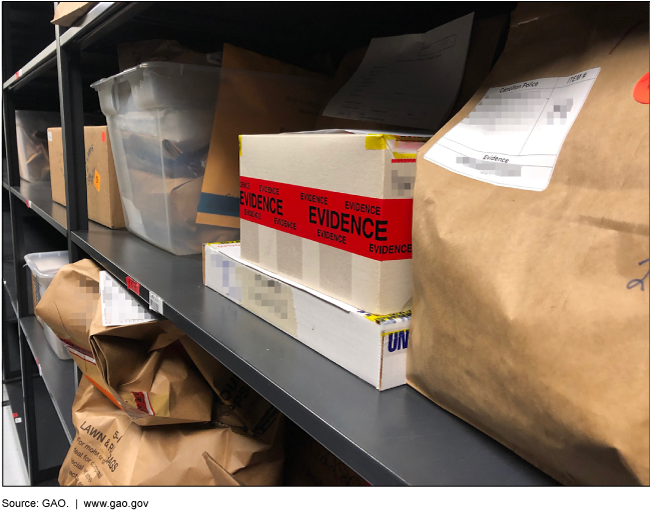 Crime scene evidence in bags and boxes on shelves.

GAO found that the reported number of backlogged requests for crime scene DNA analysis at state and local government labs has increased by 85 percent from 2011 through 2017, the most recent full year for which grantee data were available (from about 91,000 to about 169,000). This growth has occurred despite labs' collectively processing more requests over time, as shown below.

a“DNA requests” means requests for biology screening and/or DNA testing such that if a request requires one or both, it is counted once.

cThe National Institute of Justice (NIJ) defines a “backlogged” request for crime scene DNA analysis as a request that has not been closed by the issuance of a report to the submitting agency within 30 days of receipt in the lab.

GAO found that the Office of Justice Programs (OJP)—the primary grant-making arm of the Department of Justice—has not consistently documented program-wide goals for its DNA Capacity Enhancement and Backlog Reduction grant program (CEBR). For example, it has documented different meanings of “capacity enhancement.” Additionally, CEBR performance measures do not fully reflect selected attributes of successful performance measures, such as having measurable targets. These issues hinder OJP's ability to assess program results.

GAO found that OJP has designed controls to achieve its objectives related to compliance with selected requirements for transparency in grantee procurement that apply to both OJP and CEBR grantees. However, OJP has not properly designed all controls related to selected requirements for conflicts of interest and lobbying. While OJP has designed a control to review confidential financial disclosure reports submitted by OJP employees who administer CEBR grants, OJP does not have the required documentation designating which officials are authorized to certify these reports. Similarly, OJP has designed controls to obtain required lobbying certification and disclosure forms from grantees, but OJP has not taken steps to ensure that grantees collect and forward to OJP, as appropriate, these forms from subgrantees and contractors, as required.

Many state and local government crime labs continue to have backlogs of requests for crime scene DNA analysis, which may include sexual assault kits, despite DOJ awarding nearly $1 billion since 2004 through the CEBR grant program to enhance lab capacity and reduce backlogs. Additionally, questions have been raised about potential improper connections among those who profit from CEBR grants—such as private labs and DNA equipment vendors—and those who advocate for CEBR funding.

This report examines, among other things, (1) what is known about the amount of backlogged DNA evidence at state and local government labs; (2) the extent to which OJP measures CEBR grant performance; and (3) the extent to which OJP has designed controls to identify conflicts of interest related to CEBR grants. GAO reviewed CEBR grantee data on DNA evidence backlogs from 2011-2017 (the most recent years of comparable data). GAO reviewed documentation on CEBR performance and controls related to conflicts of interest, transparency in grantee procurement, and lobbying. GAO also reviewed relevant reports and studies, and interviewed officials from DOJ.

Some Sexual Assault Kits Aren’t Sent to Crime Labs. Why not?

Evidence in sexual assault kits can be a powerful tool to help find and prosecute perpetrators of...
Blog Post

Some Sexual Assault Kits Aren’t Sent to Crime Labs. Why not?