Since 2014, millions of people have bought health insurance through exchanges established under the Affordable Care Act. The Act set federal standards for coverage and subsidized coverage for some people with low incomes.

We looked at factors driving insurer participation in exchanges, interviewing representatives of 9 insurers and reviewing data on profits and losses.

Insurers told us they generally raised their premiums from 2014-2018 and projected more increases in 2019. Reasons for this included:

Higher costs to them to provide services than first estimated

The ending of several federal risk mitigation and cost-sharing programs 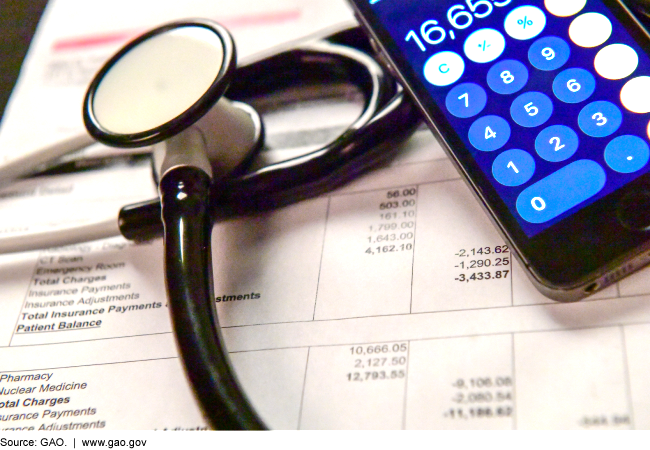 A stethoscope and calculator on top of a medical bill.

Claims costs generally grew from 2014 to 2017, but selected issuers sometimes experienced wide swings in costs from year to year. Most issuers attributed the volatility in costs, in part, to large changes in the number and health of enrollees each year.

Selected issuers also varied significantly in their decisions to expand or reduce their participation in the exchanges and make changes to premiums and plan design. Issuers cited several key factors driving changes.

Federal funding changes. Selected issuers cited the planned phase out of federal programs that helped issuers mitigate risk, including payments and adjustments for issuers with higher cost enrollees, the limited funding for one of those programs, and the ending of federal payments for cost-sharing for certain enrollees, as reasons for reducing participation and increasing premiums.

Looking to 2018 and 2019, selected issuers said that changes in federal and state policies would continue to affect decisions, particularly on premium changes.

Since 2014, millions of individuals have purchased coverage through the health insurance exchanges established under PPACA. PPACA altered the individual health insurance market by setting federal standards for coverage and subsidizing exchange coverage for certain low-income individuals. In the first 5 years of exchanges, issuers have moved in and out of the market and increased premiums, but little is known about issuers' claims costs or the factors driving their business decisions.

PPACA included a provision for GAO to examine exchange activities, including issuers' experiences participating in the individual market exchanges. This report examines (1) claims costs of issuers participating in exchanges, and (2) factors driving selected issuers' changes in exchange participation, premiums, and plan design. GAO reviewed data from nine issuers participating in five states, which were selected to represent a range in size, tax status, and exchange participation. The five states—California, Florida, Massachusetts, Minnesota, and Mississippi—were selected to provide variation in geography and whether they had a federally facilitated or state-based exchange. GAO also conducted a literature review, reviewed federal data, and interviewed the selected issuers, officials in the selected states, and stakeholder groups.