The Department of Energy is tasked with cleaning up waste from Cold War nuclear weapons production, much of which is hazardous or radioactive. DOE spends about $6 billion a year on this cleanup, and faces about $500 billion in future liabilities.

Agreements between DOE and its regulators set requirements and milestones (deadlines) for the work at each cleanup site.

We found that DOE didn't accurately track or report whether milestones were met, missed, or postponed. We also found that sites continually renegotiate milestones they are at risk of missing.

We made 4 recommendations to address these and other issues we found. 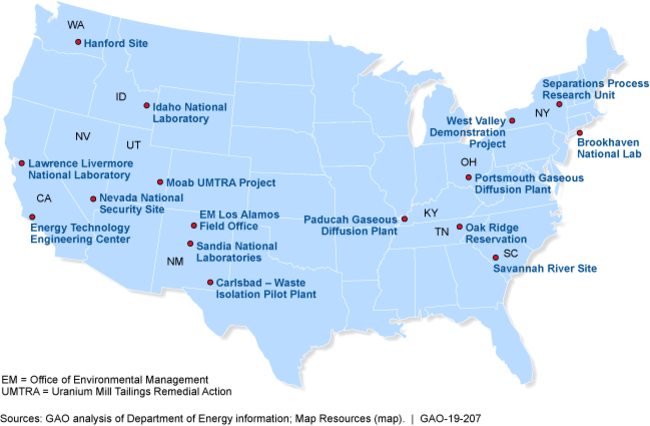 This is a map of the United States marking the 16 sites.

EM does not accurately track met, missed, or postponed cleanup-related milestones at the four selected sites, and EM's milestone reporting to Congress is incomplete. EM sites renegotiate milestone dates before they are missed, and EM does not track the history of these changes. This is because once milestones change, sites are not required to maintain or track the original milestone dates. GAO has previously found that without a documented and consistently-applied schedule change control process, program staff may continually revise the schedule to match performance, hindering management's insight into the true performance of the project. Further, since 2011, EM has not consistently reported to Congress on the status of the milestones each year, as required, and the information it has reported is incomplete. EM reports the most recently renegotiated milestone dates with no indication of whether or how often those milestones have been missed or postponed. Since neither EM headquarters nor the sites track renegotiated milestones and their baseline dates at the sites, milestones do not provide a reliable measure of program performance.

EM officials at headquarters and selected sites have not conducted root cause analyses on missed or postponed milestones; thus, such analyses are not part of milestone negotiations. Specifically, EM has not done a complex-wide analysis of the reasons for missed or postponed milestones. Similarly, officials GAO interviewed at the four selected sites said that they were not aware of any site-wide review of why milestones were missed or postponed. Best practices for project and program management outlined in GAO's Cost Estimating and Assessment Guide note the importance of identifying root causes of problems that lead to schedule delays. Additionally, in a 2015 directive, DOE emphasized the importance of conducting such analysis. Analyzing the root causes of missed or postponed milestones would better position EM to address systemic problems and consider those problems when renegotiating milestones with regulators. Without such analysis, EM and its cleanup regulators lack information to set more realistic and achievable milestones and, as a result, future milestones are likely to continue to be pushed back, further delaying the cleanup work. As GAO has reported previously, these delays lead to increases in the overall cost of the cleanup.

GAO reviewed agreements and milestones at EM's 16 cleanup sites and compared information tracked by EM headquarters and these sites; interviewed officials from four selected sites (chosen for variation in location and scope of cleanup, among other factors); and reviewed EM guidance related to milestone negotiations.

GAO is making four recommendations, including that EM establish a standard definition of milestones across the cleanup sites, track and report original and renegotiated milestone dates, and identify the root causes of why milestones are missed or postponed. In commenting on a draft of this report, DOE agreed with three of the recommendations and partially agreed with a fourth.