Federal agencies administer employment and training programs to help job seekers find and get work. While we identified 47 such programs in 2011, there are 43 now. Spending for these programs has decreased as well.

Multiple programs provide similar services, often to similar groups of people. While agencies have tried to manage this overlap by trying to coordinate their programs, they generally don't know whether their efforts are working.

We recommended that the Department of Labor develop a strategic plan for evaluating these programs that includes assessing what federal agencies are doing to coordinate them.

Resource Center for Participants in a SNAP Employment and Training Program 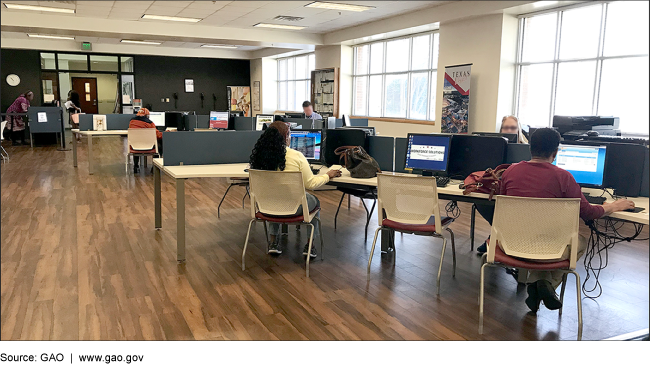 The number of federal employment and training (E&T) programs and program obligations have declined since GAO's 2011 report. In that review, GAO identified 47 E&T programs and found that 44 had overlap with at least one other program in that they provided similar services to a similar population. In fiscal year 2017, the most recent year data are available, GAO identified 43 E&T programs, or 4 fewer than in 2011 (see figure). From fiscal year 2009 to 2017, federal agencies' annual obligations for E&T programs decreased from about $20 billion to $14 billion. GAO analysis of survey data found the decrease in obligations was largely due to the expiration of funding from the American Recovery and Reinvestment Act of 2009, which had provided additional funding for selected E&T programs during and after the Great Recession.

Survey results from federal administrators of the 43 E&T programs show that the programs continue to span nine agencies and generally overlap by providing similar services, such as employment counseling and assessment services (39 of 43) and job readiness training (38 of 43). Further, programs targeting a specific population, such as Native Americans, veterans, or youth, also provided similar services. In some cases, such overlap may be appropriate or beneficial, but it may also suggest opportunities for greater efficiency.

Almost all (38 of 43) E&T programs reported at least one action to manage fragmentation or overlap, such as co-locating services and sharing information. However, the agencies were not able to consistently provide information on the results of these actions and few evaluations encompassed multiple programs. Among studies GAO identified, six examined more than one E&T program, but only one assessed how any coordinated activities benefited the population served. None of the six studies focused on Native Americans, youth, or refugees. The Workforce Innovation and Opportunity Act (WIOA) encourages agencies to conduct evaluations, and specifically requires the Department of Labor (DOL) to publish a 5-year plan describing certain E&T priorities, consistent with the purpose of aligning and coordinating certain programs. While DOL reported it took some steps, it continues to lack a strategic plan for E&T evaluations over a multi-year period. As a result, DOL does not know whether actions to manage overlap are successful.

This report examines (1) how the number of and obligations for federal E&T programs have changed since GAO's 2011 review, (2) the extent to which E&T programs continue to provide similar services to similar populations and examples of potential effects, and (3) the extent to which agencies have taken actions to address previously identified fragmentation and overlap among E&T programs and what agencies have learned about the results. To address these objectives, GAO surveyed E&T program administrators, reviewed relevant reports and studies, and interviewed federal agency officials.

GAO recommends that DOL, in consultation with other federal agencies, develop and publish a multi-year strategic plan for its evaluations of employment and training that includes assessing the completeness and results of efforts to coordinate among E&T programs. DOL agreed with our recommendation.