Corps reports and academic studies say the Corps faces higher costs and delays because it receives funding for only a part of a project each year, so it must contract for projects in pieces. Corps officials estimate that this inefficient approach will add $229 million to the cost of one project alone.

We recommended the Corps seek ways to use construction funds more efficiently.

A towboat brings two barges through a lock (left) and a new lock under construction (right) on the Monongahela River in Charleroi, Pennsylvania. 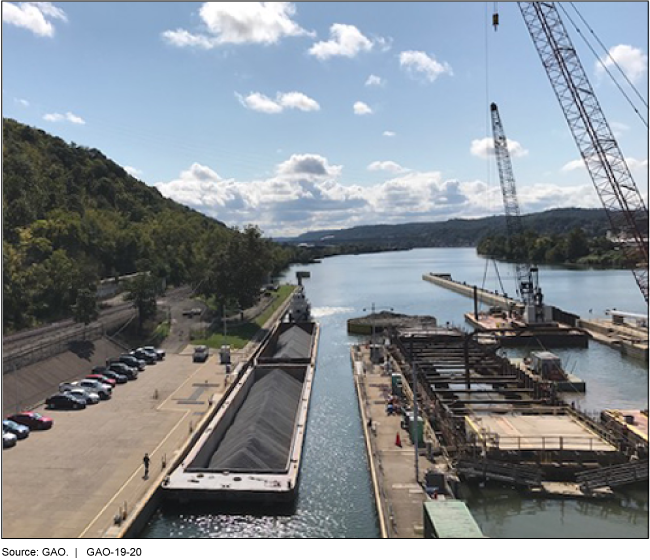 This is a photo showing a towboat bringing two barges through a lock and a new lock under construction.

With regard to inland-waterways construction projects, the Corps prioritizes them based on expected costs and benefits. The Corps assesses the net economic benefits of inland-waterways construction projects' alternatives by comparing estimated direct costs (e.g., construction costs to build a new lock chamber) to estimated reductions in the waterway transportation costs (e.g., reduced travel costs related to a reduction in the time it might take for a barge to pass through a larger lock chamber). According to Corps officials and stakeholders, the current incremental-funding approach for prioritized projects, among other things, has resulted in schedule delays (as shown below) and cost increases. Although full upfront funding for capital projects is an important tool for effective management, inland-waterways construction projects have been funded incrementally, meaning the Corps requests—and Congress appropriates—annual funding that covers a portion of a project's estimated costs. Corps reports and academic studies have found that this approach results in increased project costs because the Corps must contract for construction in separable pieces. This approach is less efficient than contracting for the entire project at once. For example, Corps officials currently expect that the Kentucky Lock Addition project will cost at least $229 million more than the originally estimated cost as a direct result of this contracting approach. Without some change in the way inland-waterways construction projects are funded to either provide full funding or reduce the effects of incremental funding by concentrating funding on fewer projects at one time, current cost increases and schedule delays resulting from inefficient contracting are likely to continue.

aEstimated completion refers to the date at which the facility is expected to be operational.

The Corps is primarily responsible for operating and maintaining the nation's inland waterways, including maintaining locks and dams as well as rehabilitating, modernizing, or constructing new infrastructure as needed. Persistent schedule delays and cost overruns for inland-waterways construction projects have prompted some in Congress to explore funding and management alternatives.

GAO was asked to review options to change the management of inland waterways. Among other things, this report assesses how the Corps allocates funds for operations and maintenance for the inland waterways, describes how the Corps funds construction projects, and assesses the effect of the current funding approach on projects' costs and schedules. GAO reviewed Corps documents and data; interviewed officials from Corps headquarters, six districts, and representatives of regional and national stakeholder groups—including commercial and recreational interests as well as contributors to relevant literature—selected to achieve a variety of viewpoints; and developed a simulation of the effect of various funding approaches on the total funding requirements and timelines for a set of hypothetical construction projects.

GAO is making two recommendations: that the Corps define and measure deferred maintenance for inland waterways and that it pursue changes to increase its ability to more efficiently use available funding for construction. The Department of Defense concurred with GAO's recommendations.